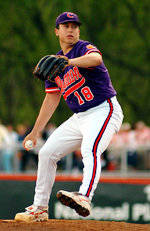 Jason Berken and Ryan Hinson combined to limit Boston College to one run on six hits and lead #6 Clemson to a 4-1 victory in front of 862 fans in the second game of a doubleheader at Commander Shea Field on Saturday afternoon. With the win in the series finale, the Tigers won the three-game set 2-1 and improved to 29-13 overall (12-6 ACC). The Eagles fell to 20-20-1 overall, 5-16 in the ACC.

Berken (5-3) pitched 6.0 innings, allowing five hits, one run, and three walks with seven strikeouts to earn the victory. Freshman lefthander Ryan Hinson, who was drafted by the Boston Red Sox in 2005, picked up his first career save by pitching 3.0 scoreless innings, and allowing just one hit and no walks with a strikeout. Eagle starter Nate Jeanes (1-4) allowed three runs on five hits in 3.0 innings, and suffered the loss.

Clemson jumped out to a 2-0 lead in the first inning. Brad Chalk reached on a one-out single off Jeanes. After Travis Storrer struck out for out #2, Colvin walked and Harbin blooped a single to center to score Chalk, while Colvin advanced to third. With Andy D’Alessio at the plate, Jeanes was called for a balk to score Colvin.

In the second inning, Marquez Smith led off with a double in the right-field gap. After the next two Tigers were retired, Demmink laced a single off the wall in right field to score Smith.

The Eagles cut the Tiger lead to two runs in the bottom of the second. Dave Preziosi led off with a walk, advanced to second on Shawn McGill’s groundout, and went to third on a wild pitch. After Eric Campbell struck out for out #2, Jett Ruiz hit a high fly ball to deep right-center that dropped in for a double to bring home Preziosi.

The Tigers added an insurance run in the eighth inning. Colvin and Harbin led off with singles, then Colvin was erased at third on D’Alessio’s bunt back to the pitcher. Smith followed with a single through the left side on a 1-2 pitch to score Harbin.

Clemson will play host to Wofford on Wednesday at 7:15 PM.