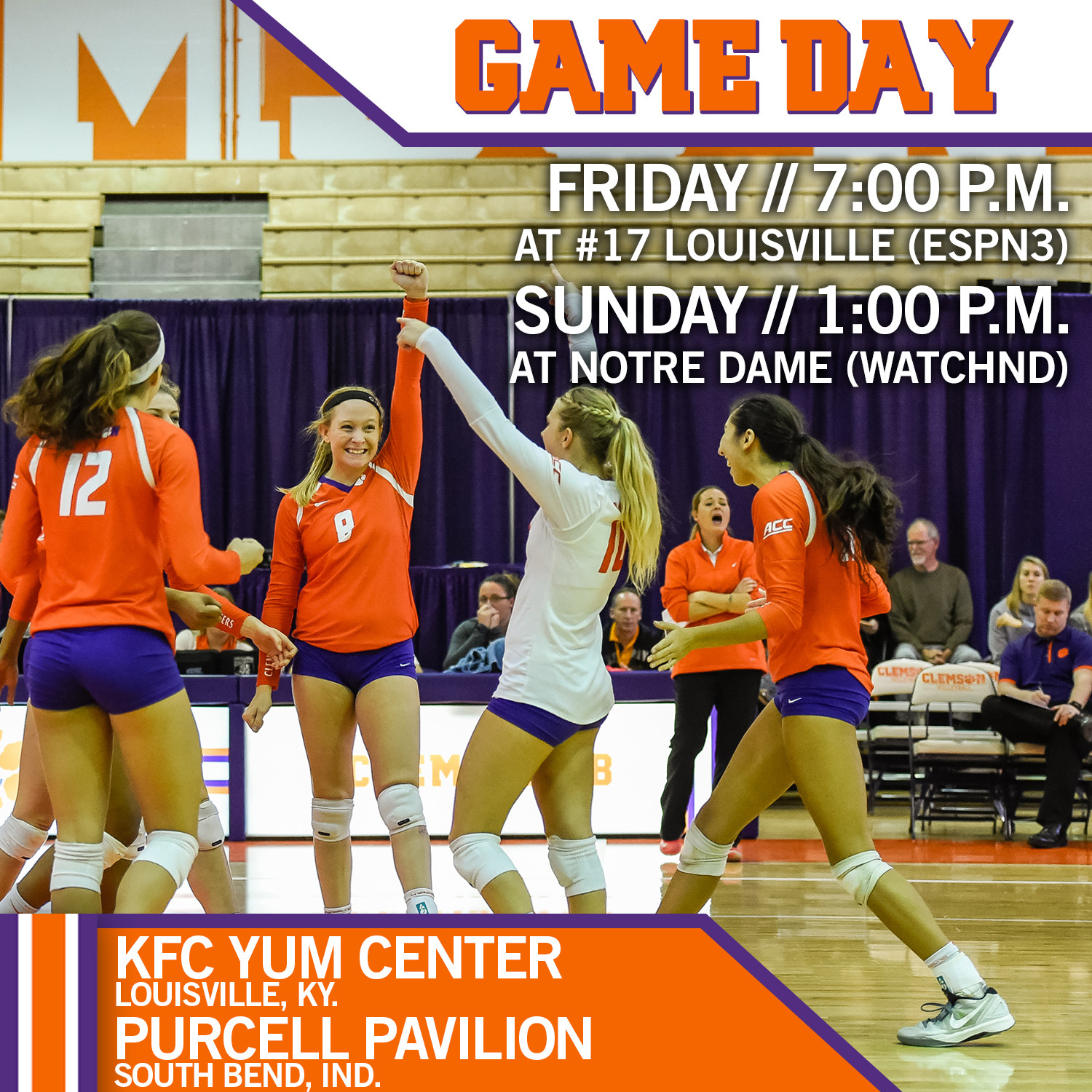 CLEMSON, S.C. – Clemson’s matches against #17 Louisville and Notre Dame this weekend mark its final road trip of the 2015 season. The Tigers will compete on six-days rest as they haven’t faced an opponent since their road trip that ended last Friday and included a four-set victory at Georgia Tech.

On Friday night, the Tigers are due to face one of the hottest teams in the country at 7:00 p.m., in the KFC Yum Center as the Cardinals have won five straight matches. Three of those matches were against NCAA Tournament hopefuls Pittsburgh, Miami and #20 Florida State.

Clemson will look to even the score on Sunday against the Fighting Irish after Notre Dame defeated the Tigers in five sets in Jervey Gym back on October 9 after it had just taken Syracuse to five sets.

This past road trip was packed with key moments as the Tigers defeated Georgia Tech in Atlanta for the first time since 2011 in Hugh Hernesman’s first ACC victory. Against the Yellow Jackets, Leah Perri was just a dig shy from 20 kills and 20 digs while registering her 1,000th career kill. In the same match, Keelie Arneson cracked the NCAA’s list of top 10 all-time career dig leaders with her 31-dig performance.

Perri and Arneson have strung together perhaps their best stretches of matches this season to end the year.

Perri has posted a 4.48 kills per set average in her last six matches with 103 kills in 23 sets. The junior has recorded double-digit kills in all six of those matches and has recorded 20 or more kills and double-figure digs in three of them. In Arneson’s last five matches she has averaged 5.85 digs per set (117 digs, 20 sets) and has tallied 20 or more digs in four of them.

Notes (in 140 characters or less) • Clemson’s eight freshmen is the highest total in the Atlantic Coast Conference.• Hugh Hernesman is the ninth head coach in Clemson volleyball history.• Keelie Arneson’s 15 digs against #17 Florida State broke her into the NCAA’s list of top 25 all-time career dig leaders.• Keelie Arneson’s 31 digs in the win against Georgia Tech (11/11) broke her into the NCAA’s list of top 10 all-time career dig leaders.• Keelie Arneson is the NCAA’s active career digs leader with 2,634 digs. The total ranks her 8th all-time in NCAA history.• Keelie Arneson is just 22 digs from owning the 7th most digs ever recorded in NCAA history.• Keelie Arneson has averaged 5.85 digs per set in her last five matches (117 digs, 20 sets) with 20 or more digs in four of them.• Keelie Arneson is the 36th Clemson student-athlete to be recognized as one of the NCAA’s career leaders in a statistical category.• Keelie Arneson ranks 23rd in NCAA history with a career 5.31 digs per set average.• Keelie Arneson currently leads the ACC with a 5.11 digs per set average and is second with 501 digs.• Keelie Arneson’s 5.11 digs per set average ranks her 23rd in the nation and is the second best average in a power five conference.• Leah Perri recorded her 1,000th career kill with her 20-kill, 19-dig effort in the win against Georgia Tech (11/11).• Leah Perri has registered 4.48 kills per set (103 kills, 23 sets) in her last six matches.• In Leah Perri’s current stretch of six matches with double-digit kills she has three matches with 20-plus kills and three with 10-plus digs.• Leah Perri headlines the Clemson attack with a career-best 370 kills in 2015 which is the sixth most in the ACC.• Leah Perri ranks seventh in the conference with a 3.70 kills per set average.• Leah Perri is fifth in the ACC with 418.0 points and is seventh with a 4.18 points per set average.• Leah Perri has double-digit kills in 21-of-28 matches this season.• Kate Federico ranks seventh in the conference averaging 8.74 assists per set.• Kate Federico ranks 10th in the conference with 760 assists.• Kate Federico has 10 double-doubles this season and 14 matches with 30 assists or more.• Kate Federico has averaged 9.56 assists per set in her last four matches (153 assists, 16 sets) and has double-doubles in two of them.• Kate Federico’s 1,171 assists last year are the second most ever recorded by a Clemson freshman.• Kate Federico’s 1,171 assists in 2014 was the second highest total in the ACC and the most recorded by a freshman.• Kailey Harvell is second on the team with 253 kills and a 2.64 kills per set average.• Kennedy Wilson-Talmadge’s 10 digs against Virginia last Friday give her three 10-plus dig matches as a defensive specialist in 2015.• Two of Kennedy Wilson-Talmadge’s three matches with 10 digs or more have come in her last four matches.• Kennedy Wilson-Talmadge has 150 digs in 84 sets, which is the most of Clemson’s reserves.• Sydney Moseley has enjoyed her best four-match stretch of 2015 with 25 kills and 39 digs. She’s recorded 10 or more digs in three of them.