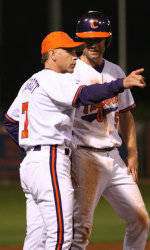 The Tigers, who were 43-23 and came within one game of the College World Series in 2005, are the highest-ranked ACC team. Clemson has made 19 consecutive NCAA Tournament appearances, tied for the third-longest streak in NCAA history, and returns all eight positions starters in the field.

Defending National Champion Texas holds the top spot in the Sports Weekly poll, followed by Florida, Clemson, Rice, and Cal. State-Fullerton in the top five. Clemson is one of four ACC schools in the top nine, and one of five ACC schools in the top 16, including Georgia Tech (#7), North Carolina (#8), Florida State (#9), and Miami (FL) (#16).

Clemson finished the 2005 season ranked #16 in the final Sports Weekly poll. The Tigers were also ranked #2 in Baseball America’s and #6 in Collegiate Baseball’s 2006 preseason poll. Clemson opens its 2006 schedule on February 17 against James Madison at Doug Kingsmore Stadium.