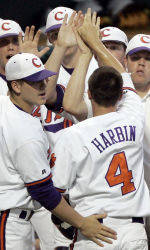 Clemson is ranked #3 in Baseball America’s 2007 preseason poll, released on Thursday. The Tigers were 53-16 and made its 11th College World Series appearance in 2006. Clemson has also made 20 consecutive NCAA Tournament appearances, the third-longest streak in NCAA history.

Rice is atop the poll, while Miami (FL), Clemson, Texas, and North Carolina round out the top five. Other ACC teams ranked in Baseball America’s top-25 poll include #9 Virginia, #12 Georgia Tech, and #18 Florida State, giving the ACC six of the top-18 teams. Clemson finished the 2006 season ranked #5 in all three major polls.

Clemson was ranked #2 in the preseason Collegiate Baseball poll in December. The Tigers open their 2007 schedule on February 16 against George Mason at Doug Kingsmore Stadium.