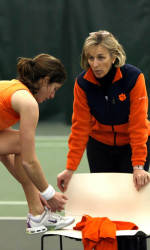 CLEMSON, SC – The Clemson women’s tennis team was ranked 12th in Tuesday’s Campbell/ITA Tennis poll. The Tigers own an 8-5 record for the 2009 season and have been ranked among the top 15 teams nationally in every poll this year.

Clemson fell three spots after dropping a 5-2 decision to sixth-ranked Miami last week. The team’s five losses have all come against teams currently ranked in the top 15 with four in the top 10.

Clemson is one of seven ACC teams ranked in the top 25. Duke headlines the group at #3 with the Hurricanes holding at #6 this week. Georgia Tech was ranked seventh and North Carolina was listed at #17. Virginia trailed the Tar Heels by one spot with Florida State rounding out the list at #24.

The Tigers will travel to Florida for their next two matches, taking on the Seminoles on Sunday, Mar. 15 before a date with Central Florida on Monday afternoon.