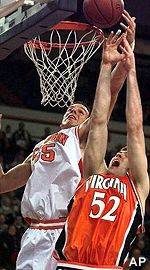 CLEMSON, S.C. (AP) – Virginia, which led by as many as 22 in the second half, went 11-of-14 from the line in the final minute to thwart Clemson’s furious second-half rally and hang on for a 98-91 win Saturday.

The Cavaliers (11-5, 2-2 Atlantic Coast Conference) ended a four-game losing streak at Littlejohn Coliseum by overcoming a career performance by Clemson sophomore Will Solomon.

Solomon scored a career-high 43 points on 14-for-21 shooting. He was 8-for-12 on 3-pointers and 7-of-10 from the line. The eight 3-pointers was also a career high and tied the single-game school record.

Clemson switched to a zone defense in the second half and that unsettled the Cavaliers, who started taking outside shots.

Donald Hand, 6-of-6 from the line in the final minute, and Chris Williams led Virginia with 18 each.

The Tigers extended the game by sending the Cavaliers to the line, but Virginia hit its free throws. There were 10 fouls within 23 seconds in the final minute.