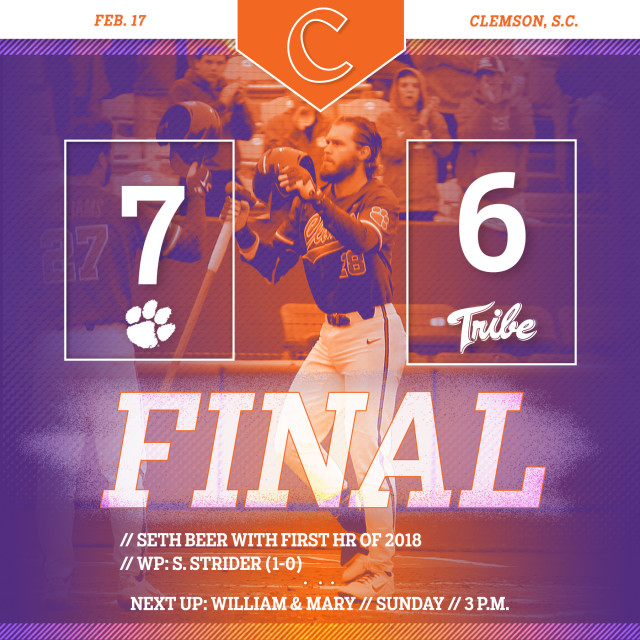 CLEMSON, S.C. – Patrick Cromwell went 2-for-3 with a double and three RBIs, and No. 12 Clemson rallied again, this time from an early 2-0 deficit, to defeat William & Mary 7-6 at Doug Kingsmore Stadium on Saturday afternoon. The Tigers, who took a 2-0 lead in the series, improved to 2-0 on the season after rallying from a 4-1 deficit in the ninth inning on Friday. The Tribe fell to 0-2.

The Tigers tied the score 2-2 with two runs in the third inning, highlighted by Seth Beer’s first home run of the year, a solo shot to left field. After the teams traded runs, Cromwell broke the 3-3 tie with a run-scoring single in the sixth inning. Clemson added another run in the sixth inning and two runs in the seventh inning, then William & Mary plated three runs in the eighth inning to narrow the Tiger lead to 7-6, but Clemson closed out the win. Logan Davidson hit a single in the fifth inning to extend his hitting streak to 11 games.

Freshman Spencer Strider (1-0) earned the win in his first career appearance. He gave up two hits, four runs and one walk with seven strikeouts in 3.0 innings pitched in relief. Carson Spiers pitched the final 1.2 innings to record his first career save. Aljo Sujak (0-1) suffered the loss.

The series concludes Sunday at 3 p.m. Tiger players are available for autographs after the game.