BLACKSBURG, Va. – Three Tigers in Janell Fullerton, LaFranz Campbell and Grant Voeks took to the podium Saturday at the 2019 ACC Indoor Track & Field Championships. Fullerton, Campbell and Voeks all achieved First Team All-ACC status in the final day of competition of the conference championship meet, which was held at Virginia Tech’s Rector Field House. Additionally, the Clemson men (51 points) climbed their way back to place fourth overall, passing Virginia in the process on the last event of the day, the 4x400m relay. The women placed seventh overall with 39 points.

“One thing I can say – in all the different event areas – we had some big highlights,” said Clemson track & field head coach Mark Elliott. “From a team perspective, we have higher expectations, obviously, we didn’t quite get there. Our hope is to get everyone healthy and be ready for the outdoor season that is upon us.”

Fullerton earned a silver medal in Saturday’s shot put after setting Clemson’s No. 2 all-time mark. Fullerton threw for 16.35m (53-7.75) on her first heave of the day. With her second-place finish, the sophomore becomes Clemson’s first women’s shot putter to receive an All-ACC distinction since Jamine Moton – Clemson’s all-time record holder in the event – did so in 1998.

Voeks, a junior, secured his First All-ACC distinction of his career after placing third overall in the shot put. Voeks PR’d after clearing a the 18-meter mark for the first time in his career with a distance of 18.11m (59-5). Voeks is Clemson’s first All-ACC recipient in the men’s shot put in five years.

On the track, the Tigers were led by junior Rebekah Smith, who earned Second Team All-ACC honors twice after registering a pair of fourth-place finishes in the 60m and 200m dashes. Smith was the Tigers’ top scorer on the women’s side, tallying a team-high 10 points.

Yeah, we’d say it was a pretty good weekend for this group 🤜🤛#ClemsonTrackXC🐅🐾 #ChampionshipSZN pic.twitter.com/bwqVpGqG6C

Up next, Clemson awaits to see if any Tiger ranks in the top-16 in the NCAA, which would effectively punch their ticket to the national championship. This year’s NCAA Indoor Track & Field Championships will take place in at the Birmingham CrossPlex in Birmingham, Alabama March 8-9. 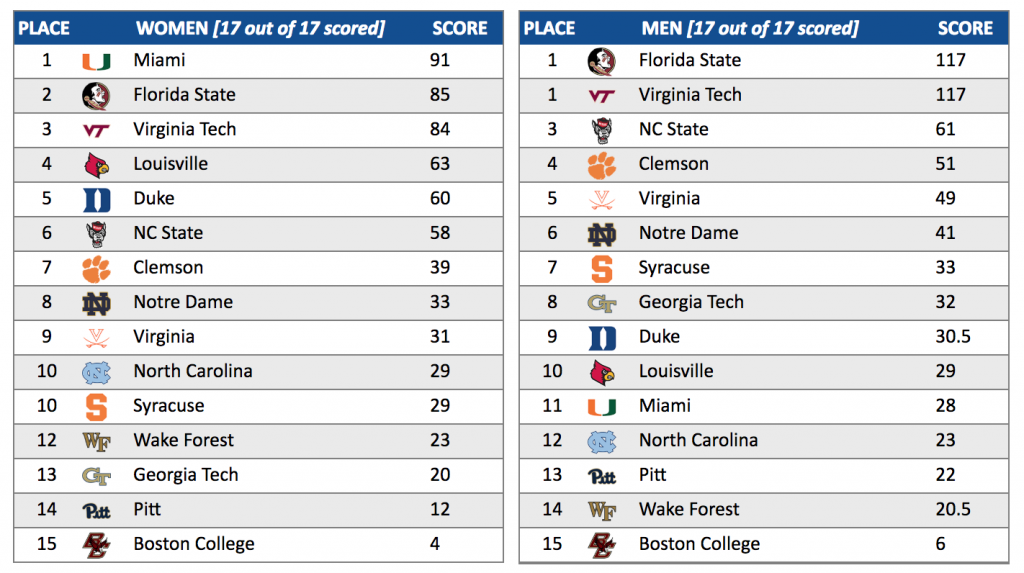