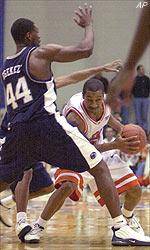 ANDERSON, S.C. (AP) – Ed Scott had 25 points to lead Clemson to a 79-70 victory over Penn State in the ACC-Big Ten Challenge on Tuesday night.

Clemson (3-0) never trailed, jumping out to a 15-2 lead sparked by Chey Christie’s seven points. He finished with 15.

The Nittany Lions, who at 0-4 have their worst start since 1931, had four turnovers during the run and didn’t get their first basket until Brandon Watkins scored with 13:46 left in the half. Penn State was led by DeForrest Riley with 18.

The Nittany Lions fought back to trail by six on Chambliss’ long 3-pointer with 7:48 to go in the first half, but they would never get closer.

The Tigers increased their lead to 10 when Olu Babalola made a steal and fed to Ed Scott, whose no-look pass to Christie underneath the basket made it 21-11.

The Tigers continued to lead with solid play from Julian Betko who had three points and two key assists. Betko found Sharrod Ford underneath the basket for an easy dunk with 1:44 to go that put the Tigers up 33-15, their largest lead of the half.

Clemson tried to pull away in the second half, but every time it looked like the Tigers were going on a run, Penn State hit a 3-pointer to keep within striking distance.

The Tigers once had a 17-point lead in the second half, but Sharif Chambliss hit from 3-point territory and Clemson’s lead was cut to 65-53 with 3:55 to go.

Clemson held at least a nine-point lead through the first 7:05 in the second half, then the Nittany Lions started shooting from outside.

Their initial second-half spurt began with Riley’s three 3-pointers in the first four minutes to cut the lead to 43-33.

Penn State trailed for most of the game by double digits. The Nittany Lions cut Clemson’s lead to nine with 1:09 left but simply ran out of time.

The Tigers are playing home games at the roughly 5,000-seat Anderson Civic Center until renovations are completed at Littlejohn Coliseum, which should have its grand reopening on Jan. 5 when Clemson plays No. 4 Duke.

This is the third time in the last four years the Tigers have faced Penn State in the ACC-Big Ten Challenge.