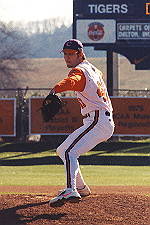 A win Friday would give Clemson its best start to a season since 1977, when the Tigers opened up the season winning 26 in a row before losing a game. The 1977 team actually lost two games in a row after the 26-game winning streak.

Saturday’s game is just one of many events at Clemson that day. Along with a surplus sale and the Clemson Invitational track meet, the annual Spring Football Game will take place at Riggs Field Saturday at 1:00 PM. Saturday’s game will feature former Tiger great Casey Stone throwing out the ceremonial “first pitch”. All three games will be broadcast on the radio on Clemson Tiger Sports Properties. The broadcast can be heard live via the internet at www.clemsontigers.com. Live stats will also be available on Clemson’s website.

Clemson holds an 84-59-1 advantage in the series dating back to 1921. Head Coach Jack Leggett is 18-9 versus the Wolfpack as the Tigers’ skipper, including an 8-3 record at Doug Kingsmore Stadium. N.C. State’s .273 winning percentage at Clemson’s home is the best of any ACC team during Leggett’s tenure at Clemson. The Tigers are also 28-12 against the Wolfpack all-time at Doug Kingsmore Stadium. Clemson won two of three games last year in Raleigh, NC.

N.C. State, the league’s top hitting team at .373, is led by sixth-year Head Coach Elliott Avent. Avent’s team has suffered five losses in six ACC games, falling twice against Wake Forest and three times against Georgia Tech. The series will be the first conference series on the road for the Wolfpack.

Marc Maynor leads the Wolfpack with a .451 batting average and 12 steals, while Brian Wright is leading the team with 45 RBIs to go along with a .429 average. Ten Wolfpack players who have seen significant playing time are hitting at least .350. The N.C. State pitching staff has a 5.54 ERA and seven complete games.

The Tigers lead the ACC with a 3-0 conference record and are the consensus #1-ranked team in the country. The Tigers, second in the ACC with a .352 team batting average, are led by Khalil Greene, who is hitting .476 with 10 homers and 39 RBIs. Jeff Baker is coming off a three-homer game against Winthrop Wednesday night in Clemson’s 6-4 win.