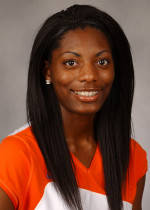 WEST LAFAYETTE, IN – The Clemson volleyball team earned a third-place finish in the Mortar Board Premier on the campus of Purdue University in West Lafayette, IN. The Tigers defeated Bradley on Friday evening and then suffered losses on Saturday to Northern Iowa and the 16th-ranked Boilermakers.

Purdue won the tournament with a 4-0 record for the weekend, while Northern Iowa placed second, going 2-1 in the event. The Bradley Braves and Albany Great Danes finished fourth and fifth, respectively.

Danielle Hepburn was named to the all-tournament team, the first such selection of her career. The sophomore from Opa Locka, FL tallied 28 kills, 18 blocks and a service ace in the event. Jeannette Abbott recorded a team-high 48 kills in Clemson’s three matches, while freshman and Spartanburg native Lia Proctor posted 35 kills in her first action as a Tiger.

In the Tigers’ first match of the day, Clemson battled Northern Iowa for over two and a half hours before falling in five games to the Panthers. Jeannette Abbott and Proctor each tallied 20 kills in the match, while Didem Ege led the team with 21 defensive saves. Meghan Steiner recorded six of the Tigers’ 13 total blocks. Laura Rowen of Northern Iowa claimed match-high honors with 23 kills, while Trisha Humpal posted six block assists.

Clemson edged the Panthers in the first game, 38-36, to take a 1-0 lead in the match. After trailing, 25-18, the Tigers knotted the score at 28-28 on a kill by Steiner. The game was then tied eight times until Clemson managed three straight points, including the game winner on an ace by Dawn Robertson, for the win. Northern Iowa claimed the second and third games by scores of 30-15 and 30-21 before the Tigers rebounded to win the fourth game in thrilling fashion.

The Panthers scored the first three points of the game and extended the lead to as many as five points at 9-5. Clemson tied the game at 13 apiece on a kill by Abbott and took its first lead since being ahead 2-0 in the second game on a Steiner kill. The score remained tight throughout the game and the Tigers faced match-point, trailing 29-27. A kill by Proctor gave the serve back to Clemson and junior co-captain Leslie Mansfield served the next three points for the 31-29 victory. The Tigers then took an early, 9-5, lead in the deciding fifth game, but Northern Iowa rallied to tie the game at nine apiece. After trading points, the Panthers prevailed, edging Clemson, 15-13, to post the win.

In the final match of the tournament, the Boilermakers claimed a tight first game over the Tigers by a score of 30-25. The teams were tied 10 times before Purdue pulled away with a five-point rally to go up 29-24. Clemson avoided game point with a kill by Hepburn, but a Elizabeth Jacques kill clinched the win for the Boilermakers. Purdue then took a 2-0 lead in the match with a 30-24 victory in the second game.

The Tigers fought back in the third game, taking an early 13-8 advantage. Clemson then rattled off seven straight points on the service of Ege to go up 20-8 and extended their lead to as many as 14 points at 25-11. The Boilermakers narrowed the gap to 27-22 with Mastandrea serving, but the Tigers won the next three points to force a fourth game. This time, Purdue started strong and won the first six points of the game. Clemson knotted the score at 8-8 but fell behind, 12-10, and the Boilermakers went on to win the game, 30-19, and the match, 3-1.

The Tigers will open its 2006 home schedule against in-state rival South Carolina on Thursday, Aug. 31 at 7:00 pm in the first match of this year’s Big Orange Bash. Event competition continues through Saturday, Sept. 2.