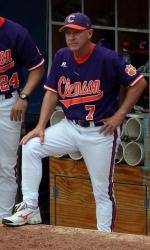 GREENSBORO, NC – North Carolina has been selected as the 2012 Atlantic Coast Conference baseball preseason favorite in a vote of the league’s 12 head coaches.

The Tar Heels were named by seven coaches as this year’s ACC team to beat, while Georgia Tech received four first-place votes and Florida State one.

Clemson received the nod as the Atlantic Division favorite. The Tigers received seven first-place votes, with the other five going to Florida State.

Clemson and Florida State were picked 1-2 in the Atlantic Division, followed by NC State, Wake Forest, Maryland and Boston College.

All 12 ACC teams open their seasons with non-conference games on Friday, Feb. 17. The 2012 ACC Baseball Championship is scheduled for May 23 through 27 at NewBridge Bank Park in Greensboro, N.C.

With North Carolina and Virginia reaching the College World Series last season, the ACC has placed a total of 14 teams in Omaha since 2006. Seven ACC teams received NCAA Tournament berths in 2011, and at least five conference teams have been selected for postseason play each of the past 10 seasons.