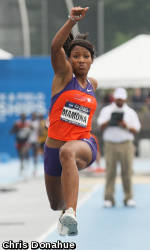 CLEMSON, SC – Two-time NCAA champion Patricia Mamona was runner-up in the women’s triple jump over the weekend in Shenzhen, China at the World University Games. She jumped 14.23 meters on her final attempt, which converts to 46’8.25″. Mamona is preparing for the IAAF World Championships, which will be held August 27 through September 4 in Daegu, Korea. The 2011 May graduate previously jumped a Portuguese record 14.42m (47’3.75″) at her home country’s national championships last month to earn qualification.

Mamona will not be the lone athlete with Clemson ties to compete at the IAAF World Championships. Travis Padgett, a five-time All-American and 2007 NCAA 60-meter champion, will be part of Team USA’s 4×100 relay pool.

Justin Murdock, a senior member of the men’s track & field team at Clemson, also competed at the World University Games last week. The Pasadena, MD native ran the 100 dash and 200 dash for Team USA. He advanced to the semifinals in the 100, where he ran 10.38 and was just shy of qualifying for the final. He made it to the second round of the 200, running a best of 21.41.