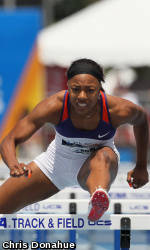 CLEMSON, SC – Three former Clemson track & field standouts and 18 current student-athletes will compete in Eugene, OR at this week’s USA Junior and Senior Outdoor Championships. Eleven of the current student-athletes will compete at the senior championships, while eight are slated for the junior meet, both of which will be held Thursday, June 23 through Sunday, June 26 at the University of Oregon’s Hayward Field. To be eligible for junior nationals, the participant must not reach the age of 20 during the year 2011.

Portions of the meet will be televised Friday, Saturday and Sunday. ESPN2 will air delayed coverage from 11:00 PM until 1:00 AM on Friday, June 24. NBC will televise the action live on both Saturday, June 25 and Sunday, June 26 from 5-6 PM. All times are Eastern.

A pair of former Olympians, including 2004 gold medalist Shawn Crawford, will compete in Eugene. Crawford, the 2004 winner in Athens, Greece in the 200 dash, is entered in that event again (6:25 PM prelims on Saturday, June 25) as well as the 100 dash. He will be joined in the 100 dash by Travis Padgett, who ran in the 2008 Olympics in Beijing. Both were NCAA champion sprinters at Clemson. The 100 prelims are scheduled for 8:40 PM on Thursday, June 23. Clemson junior Justin Murdock qualified for the event as well, thanks to a personal best 10.13 during the collegiate season.

Miller Moss, coming off a third-place finish in the decathlon, will compete again in the event beginning Thursday, June 23 at 3:45 PM. He was the fourth-place finisher in Des Moines, IA at the 2010 USA Outdoor Championships. Another graduating senior that will be competing this week will be Michaylin Golladay, the school record-holder in the 100 hurdles. The first round of that event is set for 4:20 PM on Saturday.

Bridgette Owens will compete in both the junior and senior nationals this week. The first round of the junior hurdles will be at 3:15 PM on Friday, June 24. Owens has the top seeded mark entering the competition and boasts one of the top 10 times in U.S. junior history for the event.

Other student-athletes competing in the junior nationals this week are Thor Serafenas (men’s hammer) and Lauren Terstappen (women’s pole vault).