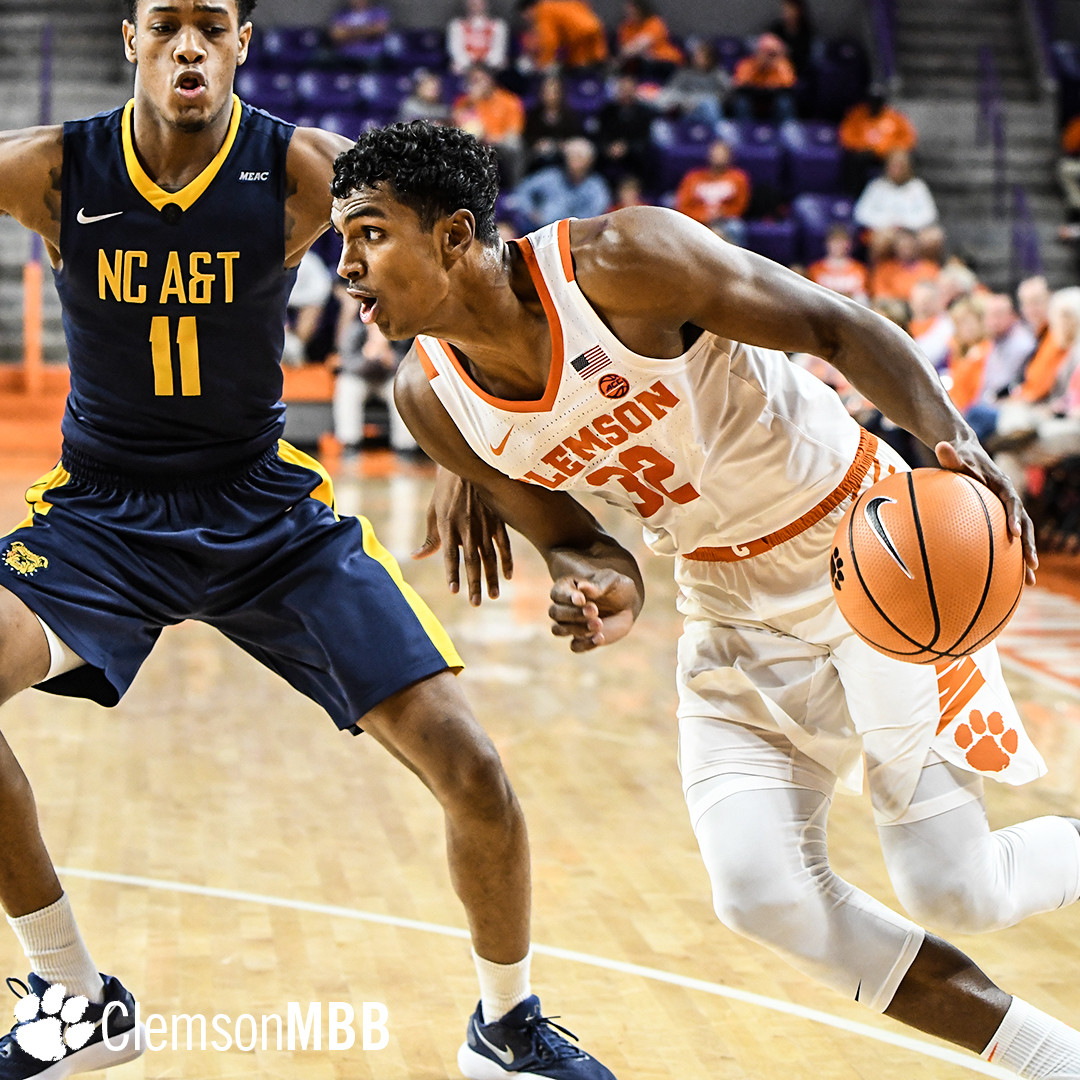 CLEMSON, S.C. — Senior leaders Donte Grantham and Gabe DeVoe both posted their second double-doubles of their respective careers with the help of five double-digit scorers for the Tigers in a 87-63 rout of North Carolina A&T on Sunday afternoon inside Littlejohn Coliseum.

Grantham talled a career-best 12 rebounds to go along with 17 points, while DeVoe chipped in 13 points and matched his career-best with 10 boards. DeVoe also posted five assists.

The Tigers (2-0) took a 41-29 lead into halftime over the Aggies (1-1), but it was the beginning of the second half that separated Clemson apart. The Tigers, already up by twelve, engineered a 12-0 run to open up a 21-point advantage.

Clemson posted five in double-figures, which were led by both Grantham and DeVoe. Both Marcquise Reed and Elijah Thomas scored 13 points a piece, while Shelton Mitchell scored 10 and posted team-leading six assists.

For the second consecutive game, the Tigers went to the foul line 20 or more times and finished shooting 15-for-22 from the charity stripe. As a team, the Tigers grabbed a season-best 45 rebounds, including 12 on the offensive glass and limited the Aggies to just three offensive boards.

With 14 assists combined from the Tigers’ starting guards, Clemson assisted on 21 of its 33 made field goals in the game – shooting just a hair under 56.0 percent from the floor.

The Tigers return to the court on Thursday, Nov. 16 when they open up play at the Gildan Charleston Classic against Ohio University. The game can be seen on ESPN2 with a 5 p.m. tip time.

Notes: Donte Grantham and Gabe DeVoe both achieved their second career double-doubles of their respective careers … Grantham posted a career-best 12 rebounds, while DeVoe matched his career-high with 10 … for the fifth time in his career, DeVoe posted five assists … with the win, the Tigers improved to 35-1 all-time against members of the Mid-Eastern Athletic Conference (MEAC) … also with the win, Clemson improved to 61-28 in the month of November under the direction of head coach Brad Brownell … coach Brownell is now just seven wins shy of 300 for his career (293).