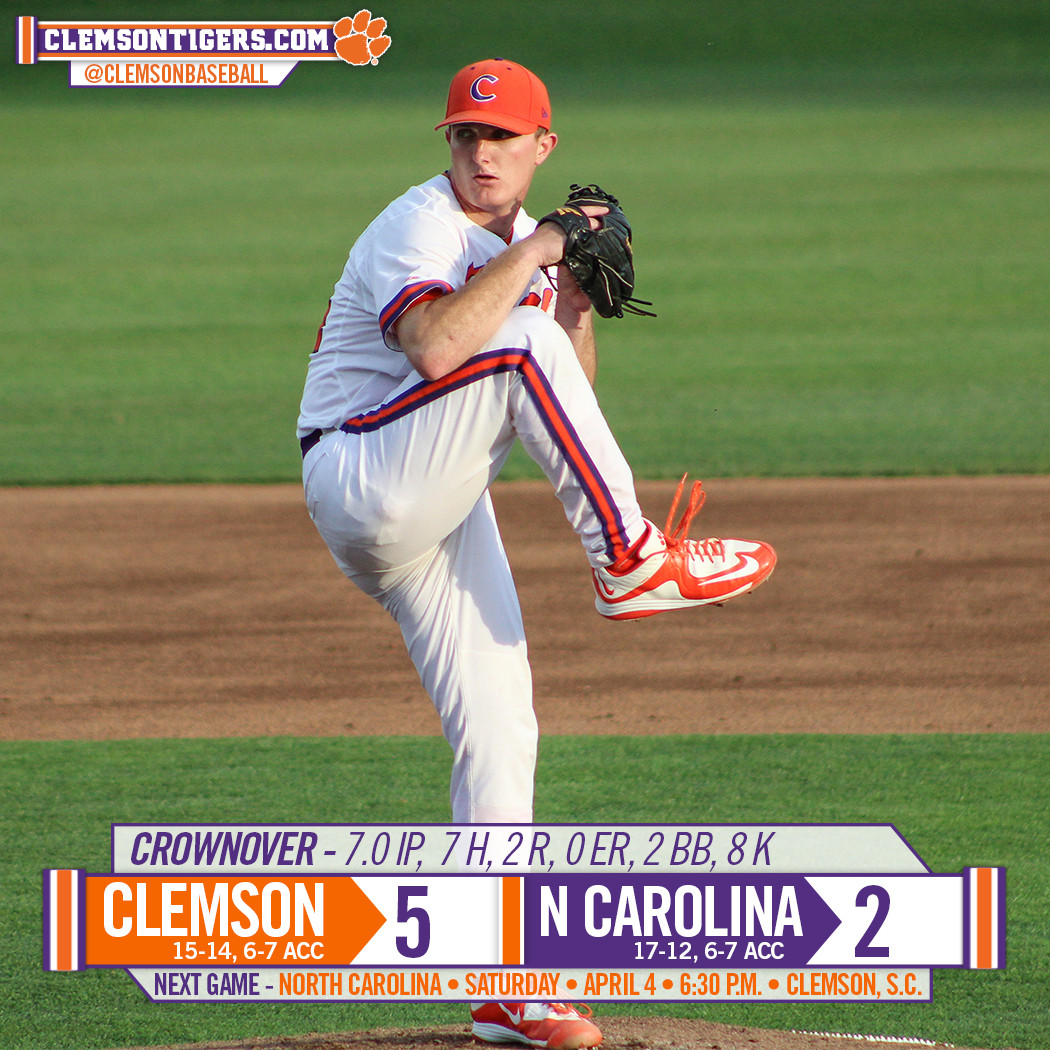 CLEMSON, S.C. – Matthew Crownover allowed two unearned runs with eight strikeouts in 7.0 innings pitched to lead Clemson to a 5-2 victory over North Carolina at Doug Kingsmore Stadium on Friday night. The Tigers, who took a 1-0 lead in the series, improved to 15-14 overall and 6-7 in the ACC. The Tar Heels fell to 17-12 overall and 6-7 in ACC play.

Crownover (5-1) earned the win by allowing seven hits, no earned runs and two walks with eight strikeouts in 7.0 innings pitched. Taylor Vetzel pitched the final 2.0 innings to record his first save as a Tiger. Tar Heel starter Zac Gallen (1-2) suffered the loss, as he gave up eight hits, five runs (three earned) and two walks with five strikeouts in 6.2 innings pitched.

“Crownover gives us that consistently tough, competitive outing every night,” said head coach Jack Leggett. “He didn’t have a whole lot going in terms of his second and third pitches. He got his changeup going a bit and threw a few good breaking balls, but he pitched out of jams. Taylor Vetzel came in and did a really nice job in relief. It was a good ballgame against a good ballclub.

“It helps everyone’s confidence. When you can score early, it loosens you up a little bit and allows you do some things on offense. We were aggressive tonight and had a really good approach going into the ballgame.”

The Tigers jumped on North Carolina with two first-inning runs on back-to-back, run-scoring doubles by Reed Rohlman and Chris Okey. The Tigers took a 5-0 lead in the third inning thanks to a Tar Heel error and a two-run double by Chase Pinder. North Carolina rallied with two unearned runs after a costly Tiger error in the seventh inning, but the Tar Heels could get no closer.

The series continues Saturday at 6:30 p.m.