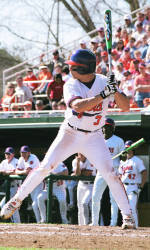 Tigers Outlast Maryland 6-4 in Game One of Doubleheader Saturday

Herman Demmink’s two-out, two-run double in the 13th inning propelled Clemson to a 6-4 win over Maryland in game one of a doubleheader at Maryland on Saturday. The win was Head Coach Jack Leggett’s 900th of his career, becoming only the 35th coach in history to record at least 900 wins as a Division I head coach. Clemson improved to 11-9 overall and 4-1 in the ACC. Maryland fell to 11-13 overall, 3-8 in ACC play.

Stephen Faris (2-0) earned the win in relief, as he pitched masterfully in relief of starter Kris Harvey. Faris allowed no runs and just two hits in 6.0 innings pitched to earn the win. Chris Bowen (1-2) suffered the loss in relief.

Maryland came out swinging in the first inning and jumped out to a 3-0 lead thanks to four hits. Leadoff batter Elliot Singletary hit the first pitch he saw high off the wall in left field and went to third on a groundout by Dan Melvin. Truan Mehl then rolled a single up the middle to bring home Singletary. After two more singles by Will Frazier and Jordan Wilson loaded the bases, Mehl scored on a wild pitch. Chad Durakis then lifted a shallow fly ball to right field that Frazier was able to score from third base on.

Clemson cut into the Terrapin lead in the third inning thanks to an error. Herman Demmink’s singled up the middle with one out and went to second on Brad Chalk’s sacrifice bunt. Taylor Harbin followed with a one-hopper to shortstop Dan Melvin that was thrown over the head of first-baseman Jordan Wilson, allowing Demmink to score on the play.

Demmink cut the Maryland lead in half in the fifth inning when he hit his second home run of the season over the wall in centerfield.

In the seventh inning, the Tigers tied the score. Stan Widmann led off with a line-drive single to center. Pinch-hitter Daniel Pritchard then laid down a two-strike bunt that Singletary muffed at first base, allowing Pritchard to reach. Demmink moved each runner up a base with a sacrifice bunt, and Widmann tied the score on a wild pitch by Brett Cecil. With one out, Pritchard broke for home on a suicide squeeze, but Chalk missed on the bunt and Pritchard was tagged out.

Maryland came right back and retook the lead in the bottom of the seventh inning on a two-out solo homer to left-center by Frazier, his fifth of the year.

Clemson rallied in the eighth inning and scored a run. Travis Storrer walked with one out and advanced to second on an infield single by Harvey. Andy D’Alessio then grounded a single to right field. Storrer collided with catcher Bobby Ryan at home, as Ryan dropped the throw from right field. Storrer missed the plate, but touched it after he recovered. Home plate umpire Junior Creech ruled Storrer was safe, but after a lengthy conference with the other two umpires, he reversed his call and ruled Storrer out. The Tigers overcame the tough call thanks to pinch-hitter Jesse Ferguson’s line-drive single up the middle, as Harvey scored on the play to tie the score. Maryland avoided further damage when pinch-hitter David Williams fouled out with two runners in scoring position.

Maryland came right back and kept the pressure on in the bottom of the eighth. Durakis led off with a single on a pop up that Ferguson misjudged in right field. After Faris loaded the bases with two walks, he got Melvin to ground out to end the frame.

In the top of the ninth inning, Clemson threatened to take the lead, but could not score. Singles by Demmink and Harbin put runners at first and third with one out. But Tyler Colvin flied out and Ben Hall grounded out to end the frame.

Then in the 10th, it looked like the Tigers would take the lead when D’Alessio crushed a ball deep over the fence down the right-field line, but first-base umpire Henry Stancil ruled the ball foul.

Maryland came right back and almost ended the game thanks to two Tiger errors, including the first of the year by Harbin, who was playing shortstop at the time. With the bases loaded and two out, Melvin lined a ball that was headed to right field, but Hall, playing second base, made a tremendous leaping catch to keep the game alive, atoning for the other error he committed in the inning.

Another Tiger error, this time by Demmink on a slow grounder by Matt Maropis, put a runner on first with no outs in the 12th inning. Jason Von Behren advanced Maropis to second on a sacrifice bunt, his second of the game. Bobby Ryan’s groundout moved Maropis to third, but Faris struck out Jowers to end the inning.

In the 13th, back-to-back errors put runners on first and second with no outs. The latter of which would have been a double play on D’Alessio’s attempted sacrifice bunt, as Ryan’s throw to second was wild. Ferguson then came to the plate and tried to bunt, but Bowen instead walked him on five pitches to load the bases. Doug Hogan grounded into a 5-2-3 double play, but Demmink came through with a double to the gap in right-center, plating two runs.

Clemson and Maryland will play the second game of the doubleheader and series finale later today. Approximate start time is 8:30 PM.