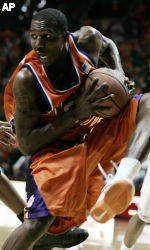 The second half featured 14 lead changes, and Cliff Hammonds supplied the last one when he hit a layup with 52 seconds to go, giving the Tigers an 82-81 lead. Four free throws – two for a technical called against the Hokies bench – completed the scoring.

Zabian Dowdell led Virginia Tech (14-14, 4-11) with 17 points, Coleman Collins had 16 and nine rebounds and Deron Washington scored 15. Jamon Gordon added 13, but his layup with 1:19 left was the Hokies lone basket after Dowdell scored with 3:50 left.

The Tigers trailed 79-72 after Dowdell’s layup, but Robinson hit his fourth 3-pointer of the game with 3:36 remaining. Two free throws by Akingbala and Robinson’s fifth 3-pointer gave the visitors an 80-79 lead with 1:45 remaining.

After Gordon’s layup gave the edge back to the Hokies, Hammonds had a jumper and free throw, Robinson added two free throws and Akingbala hit another free throw.

Clemson led 37-35 at halftime, and the Hokies took the lead for the first time with 19:48 left at 38-37 on a three-point play by Collins. The game stayed close with neither team leading by more than three until the Hokies went on a 15-9 run to take a 79-72 lead, Dowdell following a steal by Washington with a layup with 3:50 to play.

Washington had four steals and four blocks in the game.

Then, it was the Tigers turn to rally, and Robinson’s shooting helped them avenge a 75-74 loss to the Hokies at Clemson on Feb. 8, a game that went to overtime.

Virginia Tech lost despite shooting 57 percent from the field.