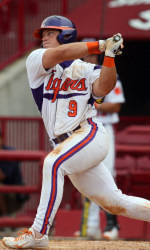 Phil Pohl hit a grand slam and totaled five RBIs to lead Clemson to an 11-3 win over Coastal Carolina in the Columbia Regional in front of 6,791 fans at Carolina Stadium on Friday afternoon. The Tigers, who moved into the winners’ bracket, improved to 34-26 on the season. The Chanticleers, who fell into the losers’ bracket, dropped to 41-18 in 2012.

The Tigers jumped out to a 6-0 lead, capped by Pohl’s grand slam with two outs in the second inning. In fact, each of Clemson’s first eight runs were scored on two-out hits. The Tigers escaped several jams in the latter innings and cruised to an eight-run victory. It was Clemson’s 2,600th win in program history. Clemson, who won its eighth regional-opener in a row, became the ninth Division I program to reach the 2,600-win mark.

Kevin Pohle (7-4) earned his team-high seventh win by tossing 5.0 effective innings in a starting role. He allowed four hits and two runs with one strikeout. David Haselden gave up three hits and one run in the final 4.0 innings pitched to record his first save of the season. Pohle and Haselden combined to strand 12 Chanticleers on base and only allowed three of their 16 baserunners to score.

The Tigers grabbed the game’s first lead in the first inning. With two outs, Richie Shaffer lofted a flyball to shallow right field that fell for a double, then Pohl flared a single to left field to score Shaffer.

In the second inning, Brad Felder grounded a one-out single through the right side and Jason Stolz walked. Two batters later with two outs, Thomas Brittle reached on an infield single to first. Felder never stopped from second and scored on the play. After Shaffer walked to load the bases, Pohl belted a grand slam down the left-field line, his ninth long ball of the season, to give Clemson a 6-0 lead. It was Pohl’s second career grand slam. His other came against South Carolina on March 7, 2010 at Carolina Stadium in the Tigers’ 19-6 victory.

The Chanticleers responded with two runs in the top of the third inning. Jacob May laced a one-out single up the middle, then Daniel Bowman grounded a double over the third-base bag. Rich Witten’s sacrifice fly to right-center scored May, then Alex Buccilli lined a two-out single to center to plate Bowman.

In the bottom of the third inning, Jon McGibbon led off with a walk and advanced to second on Spencer Kieboom’s sacrifice bunt. After Felder lined out to left field, Stolz laced a two-out double to left-center to score McGibbon.

After a 97-minute weather delay in the middle of the fifth inning, Clemson added to its lead in the bottom of the fifth inning. Kieboom lined a two-out single to right-center and Felder grounded a single through the right side. Stolz followed with a double down the right-field line to score Kieboom.

In the top of the sixth inning, Tucker Frawley led off with a hit-by-pitch and moved to second two batters later on Tripp Martin’s groundout to third. Brian Pruett followed with a two-out single to center to score Frawley. Ted Blackman hit a single through the right side, then May walked to load the bases. Bowman then belted a flyball to deep centerfield, but Brittle made the catch to end the inning.

Clemson answered back with two runs in the bottom of the sixth inning. Brittle and Shaffer led off with hit-by-pitches. Two batters later with one out, Jay Baum fisted a single through the left side to score Brittle. Two batters later, Kieboom hit a two-out single to right-center to score Shaffer.

In the seventh inning, Witten and Buccilli led off with walks, then Frawley also walked to load the bases with no outs. Justin Creel struck out looking, then Martin flied out to left as all runners held. Pruett followed with a groundout to short to end the inning without a Chanticleer scoring.

Shaffer reached on an error to lead off the eighth inning and advanced to second on Pohl’s groundout to third. Pinch-hitter Joe Costigan laced a double to right field to move Shaffer to third, then McGibbon lofted a sacrifice fly to left-center to score Shaffer.

Pohl, who earlier in the day received first-team Academic All-America honors by CoSIDA, went 2-for-5 with a grand slam and a game-high five RBIs to lead Clemson’s 13-hit attack. Kieboom, Felder, and Stolz, the #7, #8, and #9 hitters in the batting order, all had two hits apiece. Shaffer added a game-high four runs as well. Clemson was 10-for-17 (.588) with two outs in the game.

May and Pruett had two hits apiece to pace Coastal Carolina, who accumulated seven hits in the contest.

Clemson will play the winner of Friday’s game between South Carolina and Manhattan in the winners’ bracket on Saturday at 4:00 PM.