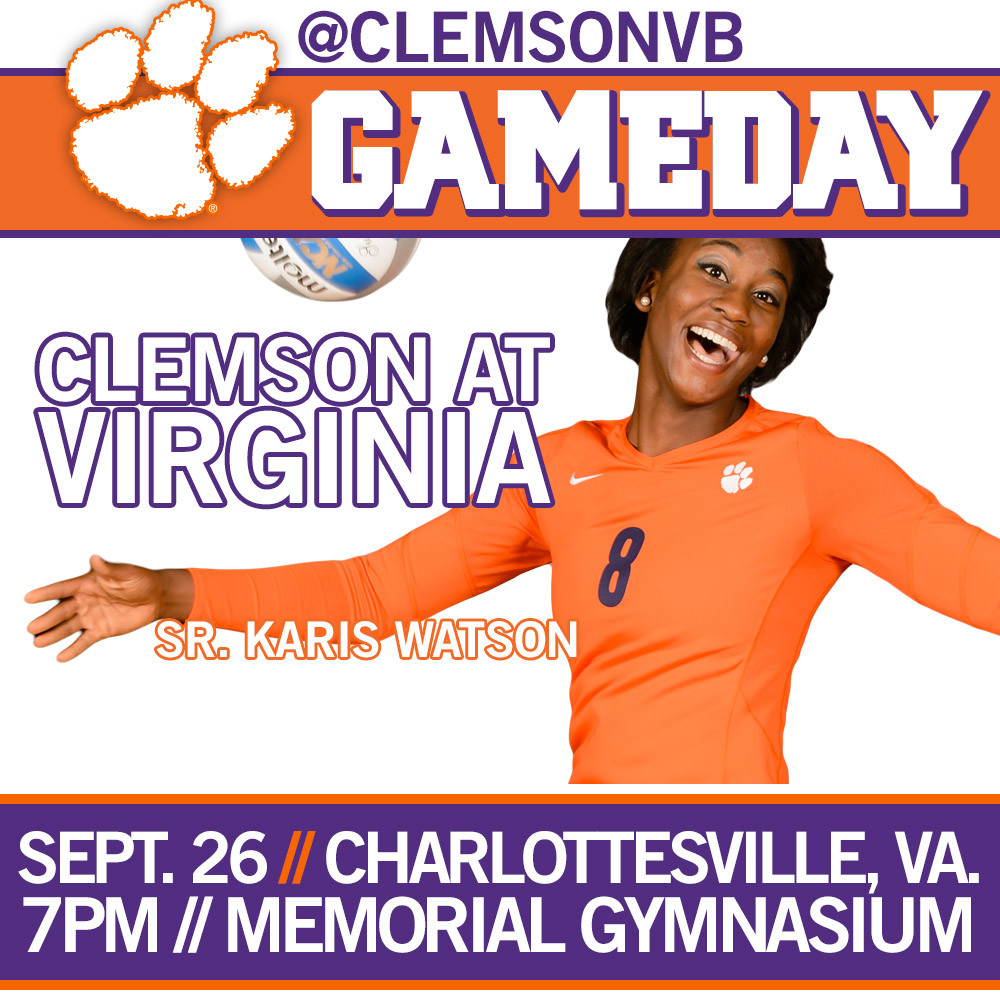 CLEMSON, S.C. – The Clemson volleyball team travels to Charlottesville, Va. on Friday, Sept. 26 to face off against Virginia. The match is the ACC opener for both teams, and first serve is scheduled for 7 p.m. at the Cavaliers’ Memorial Gymnasium.

Clemson has an 11-2 record and is coming off a 2-1 weekend in the Crimson-White Tournament in Tuscaloosa, Ala. The Tigers defeated San Diego State (3-0) and Florida International (3-0) before falling in the tournament finale to Alabama (3-1). Seniors Niki Collier and Kristin Faust were named to the Crimson-White All-Tournament Team after their stellar efforts. Faust finished the three matches with 32 kills and 29 digs, while Collier, playing libero, finished with 40 digs and 15 assists.

Faust leads the Tigers in kills per set with 3.71 and is second in digs per set (2.83) behind only the 3.31 digs per set by Collier. Clemson is led in blocks by another senior, Karis Watson, who averages 1.54 per set and has 74 overall. Watson’s 74 total blocks put her in fifth nationally in that category, while the 1.54 blocks per set figure ranks 18th in the nation.

Freshman setter Kate Federico leads the way in assists with 10.02 per set, and now with 481 assists on the season, finds herself in fifth place in program history in terms of single-season assists by a freshman. Federico sits behind Hannah Brenner, a May 2014 Clemson graduate, who posted 752 assists as a freshman in 2010.

The Cavaliers are 7-6 on the season and are coming off of a 3-2 loss to Liberty on Tuesday night. Kayla Sears leads the team in kills (3.23 per set), Natalie Bausback leads in blocks (1.13 per set), Lexie Riccolo leads in digs (3.15 per set) and Lauren Fuller leads in assists (10.51 per set). The Tigers and Cavaliers first matched up on the volleyball court in 1981, and most recently in 2013 as ACC foes.  The Tigers hold a 40-16 all-time advantage in the series, and are 14-11 in matches played in Charlottesville. The most recent meeting between the two teams was a five-set win for the Cavaliers in Jervey Gym on Nov. 2, 2013.