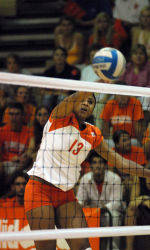 COLLEGE PARK, MD – The Clemson volleyball team recorded its fifth straight victory on Sunday afternoon, as the Tigers defeated Maryland, 3-0, in College Park, MD. The win was Clemson’s 10th overall and fifth in conference action, while the loss dropped the Terps to 8-8 overall with a 1-6 ledger against ACC foes.

Maryland went on the first run of the match, scoring seven straight points in game one to take a 15-8 lead. The Tigers then posted the next four points to narrow the gap to four points and knotted the score at 23 apiece after a second four-point rally that included two kills by Abbott and two by Hepburn. Jade Brown posted consecutive kills to give the Terps a two-point advantage that they held until Clemson scored two of its own with a kill by Hepburn and a block by Hepburn and Proctor to tie the score at 29-29.

Maryland scored its 30th point before the Tigers rallied for three straight points to win the game, 32-30. Hepburn tallied two block assists, with Kelsey Murphy and Abbott, while Murphy added a kill in the stretch.

Clemson rebounded from another early, 9-3, deficit in the second game, creeping back into the game and finally knotting the score at 17 apiece on a block by Meghan Steiner and Proctor. The Tigers then took a four-point lead at 28-24 and claimed the game, 30-25.

In the third and final game, Clemson held the early lead, scoring nine points on Hepburn’s serve to go up, 12-4. Maryland came with three points at 23-20, but the Tigers posted seven of the final nine points to secure the win.

The Clemson volleyball team will return to Jervey Gymnasium next weekend as the Tigers will play host to NC State and North Carolina. Clemson is scheduled to battle the Wolfpack on Friday night at 7:00 pm, while the Tigers and Tar Heels will clash at 6:00 pm on Saturday.