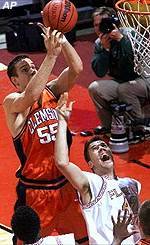 Hale’s 3-point basket with 51.5 seconds left gave the Seminoles a 58-56 lead and the free throws with 8.7 seconds remaining clinched the game.

Clemson, 6-9 overall and 0-3 in Atlantic Coast Conference, pulled within 58-57 with 27.1 seconds left on a free throw by Will Solomon, who missed the second shot.

Clemson got another chance, but Edward Scott missed the front end of a 1-and-1 free throw opportunity with 15.4 seconds left to go. The Tigers then had three good tip attempts on Scott’s missed free throw before Hale grabbed the rebound and was fouled by Andrius Jurkunas.

Hale, who had missed three straight free throws earlier in the game, sank both to give Florida State its first 2-0 start in the ACC since it joined the league in the 1991-92 season.

Hale and Damous Anderson each scored 18 points to lead the Seminoles. Anderson, who scored 15 of his 18 points in the second half, had tied the score at 41 on another 3-point play.

Anderson scored 10 points during an 18-2 spurt in the first 7:30 of the second half as Seminoles came back from a 39-28 halftime deficit.

Florida State shot just 32 percent in the first half, while Clemson went cold in the second half, making only 6-of-33 shots.

Clemson, which led 39-28 at the half, was led by Solomon’s 13 points. Jurkunas added 12, while Adam Allenspach came up with a 11 point, 11-rebound performance.