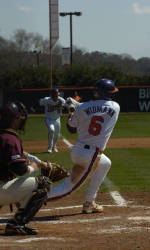 The Clemson Baseball team downed the N.C. State Wolfpack (13-6, 4-4 ACC) 3-2 in ACC action on Saturday night in front of 4,987 fans at Doug Kingsmore Stadium. The Tigers (13-7, 3-5 ACC) rallied from a 2-0 deficit in the bottom of the seventh, with the decisive run scoring on a double-play groundout by J.D. Burgess.

D.J. Mitchell (2-2) earned the win for the Tigers, pitching 7.0 strong innings, allowing seven hits and two unearned runs while striking out five against only one walk. Matt Vaughn pitched 2.0 hitless and scoreless innings with two strikeouts to record his sixth save of the season. Wolfpack starter Clayton Shunick (2-2), who came into the game having allowed only two earned runs in 23.0 innings pitched all season, was charged with three runs and struck out a career-tying-high nine batters in the loss.

N.C. State took advantage of a pair of Tiger mistakes in the top of the sixth inning to get the scoring started. Dallas Poulk led off with a single through the right side. Following a strikeout, Marcus Jones grounded a ball back to Mitchell, who spun and threw to second. Second-baseman Mike Freeman was unable to collect the throw, which bounced into centerfield, advancing Poulk to third.

While the Tigers were returning the ball to the infield, Jones took second, recognizing the Tigers were not covering second base. Matt Payne followed with a swinging bunt that Mitchell barehanded and threw to the plate. Hogan was unable to field the throw and apply the tag, as the ball bounced toward the first-base dugout. Jones then took off for home and scored as the Tigers failed to cover the plate, giving the Wolfpack a 2-0 edge.

The Tigers finally got to Shunick in the bottom of the seventh inning. Jeff Schaus reached on Shunick’s first walk of the game to lead off the frame. Kyle Parker followed with a single through the right side, moving Schaus to third. Freeman then knocked in the Tigers’ first run, lacing a single to right-center to plate Schaus. John Hinson followed with another single to right-center, plating Parker and moving Freeman to third.

Burgess, a pinch-hitter, then hit a grounder to shortstop, which Tommy Foschi fielded, stepped on second, and threw to first for the double play. However, Freeman scored on the play, giving the Tigers a 3-2 lead.

That would turn out to be all the Tigers would need, as Vaughn shut the door in the final two innings.

Widmann paced the Tigers with a 3-for-4 performance, while Parker added two hits in three at-bats. Foschi led N.C. State with a perfect 3-for-3 game at the plate. Mitchell and Vaughn held the Wolfpack without a hit in 13 at-bats with runners on base and five at-bats with runners in scoring position.

The rubber match between the Tigers and Wolfpack will be Sunday at Doug Kingsmore Stadium, with the first pitch scheduled for 1:00 PM.