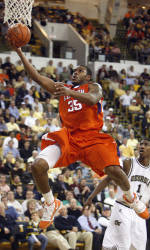 ATLANTA (AP) — Zachery Peacock made two free throws with 3.2 seconds remaining and No. 19 Georgia Tech knocked off another ranked team, beating No. 17 Clemson 66-64 on Tuesday night.

Georgia Tech (14-4, 3-2 Atlantic Coast Conference) is off to its best start since 2006-07 and has won back-to-back games over ranked teams for the first time since its run to the Final Four in 2004. The Yellow Jackets have beaten three Top 25 teams over an 11-day span, also knocking off Duke and North Carolina before edging the Tigers (15-4, 3-2).

Both teams turned the ball over in the final seconds, squandering chances to win. Finally, Georgia Tech inbounded to Peacock with 5.1 seconds left. He drove toward the free throw line and lost control of the ball, but the officials called a foul on Trevor Booker. Peacock calmly sank both foul shots on a night the Yellow Jackets made just 11 of 22 at the line.

Georgia Tech got big production from its two big men. Derrick Favors had 17 points and 14 rebounds, while Gani Lawal contributed 16 points and 10 rebounds. But it was Peacock, a former starter who now backs up those two, stepping up to provide the winning points.

The game was hardly a masterpiece by either team. Georgia Tech shot just 39 percent from the field, including a dismal 3 of 17 from 3-point range. Clemson was even worse–a mere 37 percent shooting–and only 10 of 20 at the line.

That’s when things got really sloppy. With about a six-second difference on the shot clock and the game clock, Georgia Tech’s Mfon Udofia drove toward the lane, fell down and was called for walking. Clemson had a chance to set up for a winning shot, but Demontez Stitt took off toward the basket a little early, lost control as the defense converged and had the ball bounce out of bounds off his left thigh.

That gave it back to the Yellow Jackets, who won it on Peacock’s free throws. Clemson had its inbounds pass knocked away around midcourt and never got off another shot.

Georgia Tech got off to a miserable start, missing nine of its first 11 shots and squandering four other possessions with turnovers as Clemson raced out to a 9-2 lead.

But the Yellow Jackets finally got it going just before the midway point of the opening half, beginning with Lawal’s dunk that provided the home team with its first lead, 13-11. They wound up making nine shots in a row, stretching out the margin to 31-21, before the streak ended on an airball by Favors.

Georgia Tech led 35-29 at the break. Favors had 11 points and six rebounds in the first half, while Lawal chipped in with 10 points and four rebounds. Both big men picked up their third foul early in the second half, forcing them to spend more time on the bench than coach Paul Hewitt would have liked.

They managed to make it to the end, rotating in and out with Peacock.