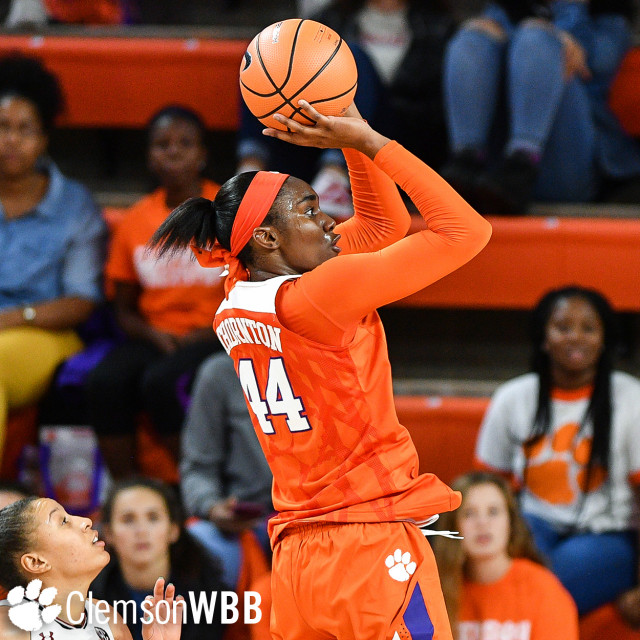 BLACKSBURG, Va. – The Clemson women’s basketball team played very well on defense against Virginia Tech, but second-half offensive struggles ultimately led to a 53-45 loss to the Hokies on Sunday afternoon in Blacksburg, Va. With the loss, the Tigers dropped to 11-17 (1-14 ACC), while Virginia Tech improved to 17-10 (6-8 ACC).

The Tigers had a great start to the game, leading 19-9 at the end of the first quarter, led by sophomore Kobi Thornton’s six points, and an 8-for-15 (53.3%) field goal shooting performance by the team. The defense played a large part in that success, holding the Hokies to 4-for-12 (33%) from field goal range and 1-for-5 (20%) from three-point range, while forcing six turnovers in the first period.

Virginia Tech was able to cut the deficit to five points in the third quarter, using a 5:49 scoring drought that ended the period for the Tigers. Defensively, though, Clemson forced six more turnovers in the period, and held the Hokies to 3-for-12 (25%) field goal shooting, solidifying a 37-32 lead after 30 minutes of play. After the Tigers opened the fourth quarter with back-to-back baskets by Francesca Tagliapietra and Thornton, Virginia Tech went on a 19-4 run to end the game and clinch the 53-45 win.

Thornton finished the game with her fourth double-double of the season, her third in ACC play, with 14 points and 10 rebounds. Carter was also in double figures in scoring with 12 points. Junior Danielle Edwards had nine points, three steals and two assists, and Collier collected eight points, five rebounds and four steals in the contest.

The Tigers return home for one final ACC regular season game against Wake Forest on Thursday, Feb. 22. The 7 p.m. contest will be Senior Day for Ivy Atkism and Alexis Carter, who will be playing their final game at Littlejohn Coliseum.