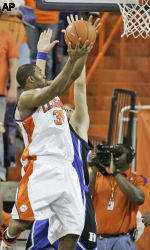 When these teams met last month at Cameron Indoor Stadium, the Blue Devils’ 68-66 victory was helped when officials incorrectly added time at the end – the extra seconds more than enough for David McClure’s winning layup.

Scheyer, though, hit two foul shots with 5.7 seconds left to put the game away.

DeMarcus Nelson had 16 points and Greg Paulus added 14 for the Blue Devils, who have won three straight since a four-game losing streak.

Cliff Hammonds and Vernon Hamilton had 14 points each for Clemson, which has lost eight of 10 games since starting the season 17-0.

Duke appeared to make the clock issue moot, outscoring the Tigers 29-8 the final 12 minutes of the first half to take a large lead into the locker room.

Nelson had all 11 of his first-half points during Duke’s large run. His foul shot started the spurt – and put the Blue Devils ahead for good, 14-13. By the time, Nelson drove in for a layup with 1:26 left before the half, Duke was up 36-17.

The Tigers missed 13 straight shots during the run and finished the half with only six field goals.

Clemson, though, made one final run with K.C. Rivers’ 3-pointer cutting it to 69-64 with six seconds left. That’s when Scheyer finished things off with his foul shots. He was a perfect 5-of-5 at the foul line.