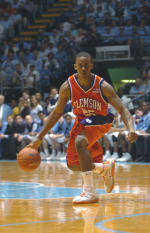 Clemson enters the ACC Tournament having won each of hislast three league contests for the first time since 1964. Clemsonhas won four of its last five games entering the ACC Tournament.Only North Carolina at 5- 0 has a better record than Clemson overthe last five league contests. Clemson’s only loss in the last fivegames was in overtime, at Wake Forest. Clemson has 18 wins in thebank so far this year, Clemson’s high figure in a season since theTigers won 20 in 1998-99. It is the most wins in the regular seasonsince 1996-97 when Clemson won 21 entering the Tournament.Clemson’s seven ACC wins are the most in a season since 1997-98.Oliver Purnell won his 300th game as a head coach when the Tigersdefeated Georgia Tech 95-82 in the final regular season game.Clemson will meet Miami (FL) in the first round of the ACCTournament. Clemson has lost just two games all year by more than10 points. The Tigers largest margin of defeat this season was the24- point loss at Miami (FL) on January 18. Vernon Hamilton hasbroken a Clemson steal record each of the last two games. He setthe season record at Virginia Tech and now has a record 78 for theseason. He broke Terrell McIntyre’s record for career steals in thewin over Georgia Tech and now has 196, two more than McIntyre.Clemson has scored at least 86 points in each of the last threegames, all Tiger wins. This is the first time in Clemson historythat the Tigers have scored at least 86 points in three consecutiveACC wins. Clemson scored 61 points in the second half in the winover Georgia Tech, Clemson’s highest scoring half in an ACC gamesince Jan. 13, 1993 (66 at Virginia). Akin Akingbala has averaged15.5 points and 8.6 rebounds per game over the last 11 contests. Heis shooting .545 from the field during this time. He has scored indouble figures in 10 of his last 11 games. Shawan Robinson has made22 of his last 43 threepoint goals (.512) and has averaged 20points per game over the last five contests. Clemson has made 52 ofits last 119 three-point goals (.437) over five games and theTigers are averaging 85.6 points per game over those five contests.Clemson has made at least 40 percent of its three-point shots ineach of the last three games, Clemson’s longest streak of 40percent three-point shooting since the 1999-00 season. CliffHammonds is second in the ACC in conference games inassist/turnover ratio. He has 12 assists and just one turnover inthe last three games covering 80 minutes of play