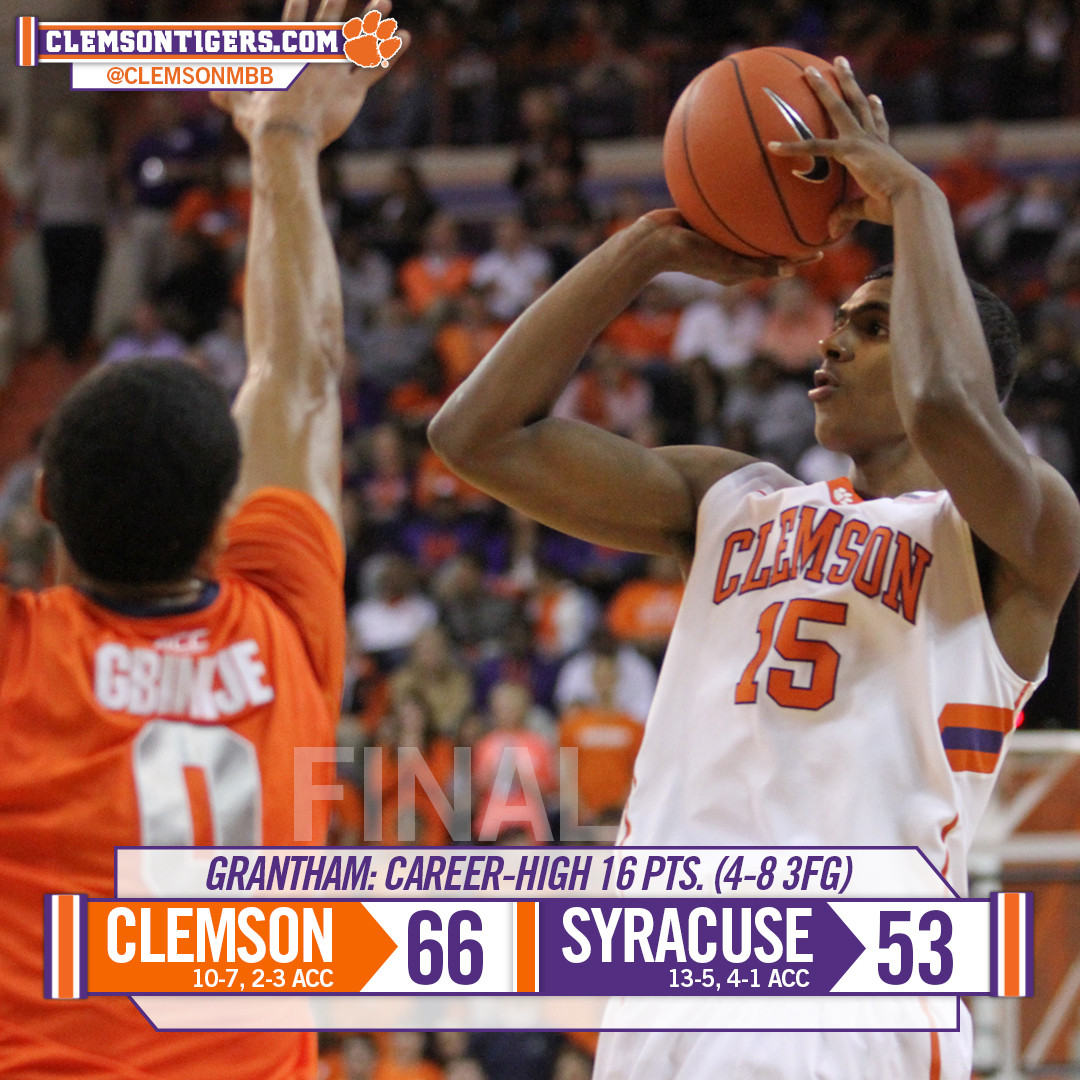 CLEMSON, S.C. — Fueled by an energized crowd, the Clemson Tigers rolled the Syracuse Orange on Saturday, 66-53 in Littlejohn Coliseum. Freshman forward Donte Grantham led the Tigers in scoring with 16 points and Jaron Blossomgame and Rod Hall each added 15 in the winning effort, pushing Clemson’s record to 10-7 on the season and 2-3 in ACC play. Syracuse fell to 13-5 overall, 4-1 in the ACC.

“We had a lot of students come out and support us,” Blossomgame said. “Just having the students out there and everyone, it helped bring more energy into the building and that transfers to the court. All the players are talking to each other and it’s a really good feeling seeing everyone out in the stands.”

The lone lead held by the Orange was in the opening minutes of the game, but a Blossomgame layup and a Hall jumper secured the lead for Clemson, and it wouldn’t be surrendered. The Tigers scored 39 points in the opening half of play to stake a 21-point lead at the intermission. Clemson held the Orange to just 25 percent shooting in the opening frame.

Hall of Fame coach Jim Boeheim’s unit is notorious for its stingy 2-3 zone, but the Tigers were able to combat the Orange’s efforts with a high level of execution and outstanding shooting. Syracuse dared Clemson to shoot from long range and the Tigers responded by knocking down eight from long distance, including a season-high four by Grantham.

The Tigers were also active on the boards especially on the offensive side of the ball, nabbing 13 offensive rebounds outscoring the Orange 21-11 on second chance points. Clemson countered the Syracuse zone by utilizing a healthy mix of zone and man-to-man defense to keep the Orange off balance. The lone offensive bright spot for Syracuse was star forward Rakeem Christmas, who led the Orange with 21 points on 10-of-13 shooting.

After just one day of rest, the Tigers return to action Monday in Littlejohn Coliseum against the Florida State Seminoles for a 9 p.m. ACC tilt. Tickets are available at 1-800-CLEMSON and online at ClemsonTigers.com.

[View the story “Clemson vs. Syracuse” on Storify]