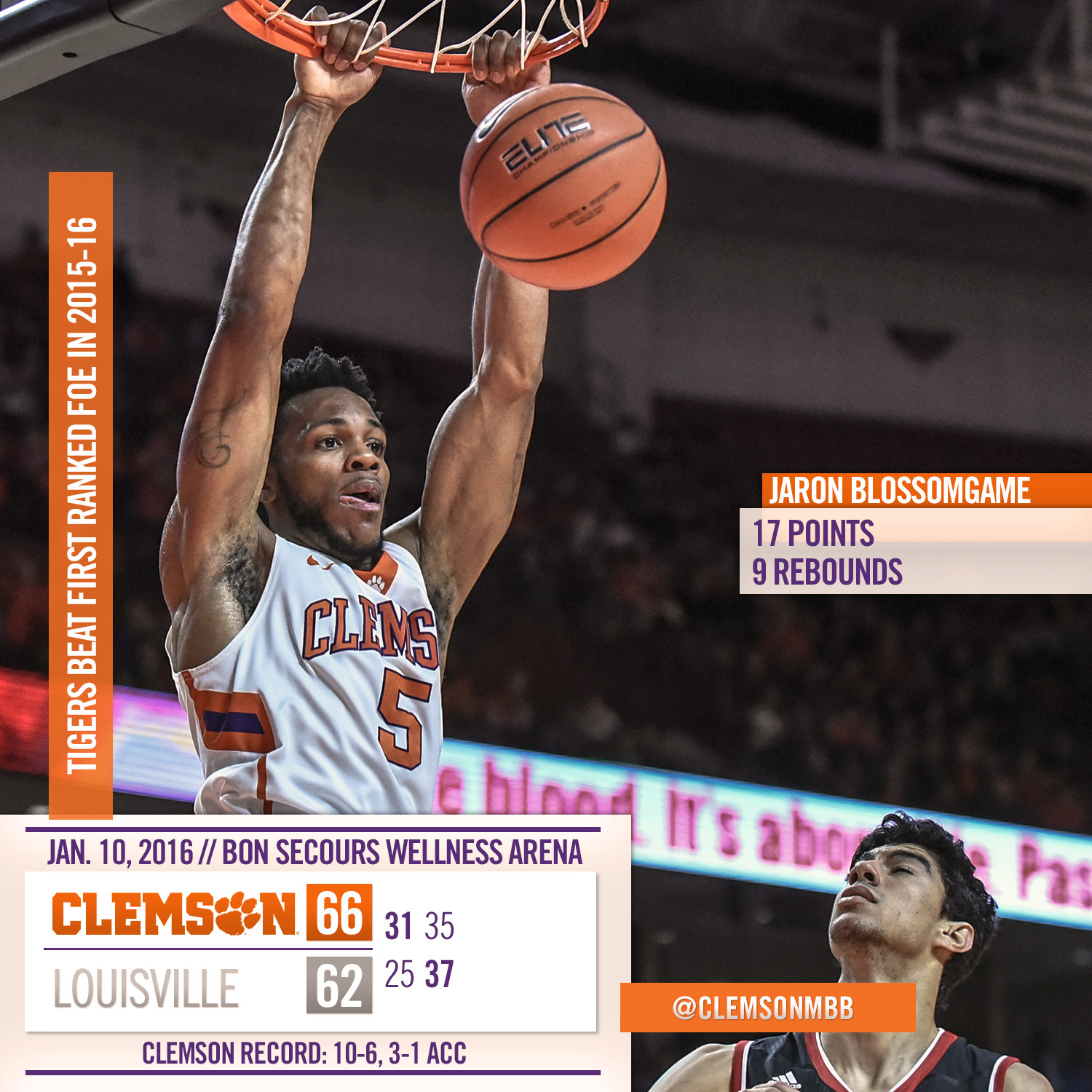 GREENVILLE, S.C. — Clemson won its third straight ACC game on Sunday, downing No. 16 Louisville in a nail biting, 66-62 victory in front of 9,562 fans at Bon Secours Wellness Arena. The Tigers are now 10-6 and 3-1 in the ACC. Louisville dropped its first conference game of the season, falling to 13-3 overall.

Head coach Brad Brownell, who picked up win No. 100 at Clemson, was ecstatic with the Tiger victory.

“We are playing much better and learning to handle adversity,” he said. “We are understanding our team a little bit better and gaining our confidence. This was a good win for us.”

Donte Grantham lit the floor up early shooting back to back threes in the first five minutes of play. He went on to make 4-6 from long distance, finishing with 12 points. Avry Holmes contributed a career-high 11 free throws and 16 points, while Jaron Blossomgame posted 17 points and nine rebounds for the Tigers. Clemson shot just 33 percent and was outrebounded by 21, but forced 17 turnovers by the Cardinals and made 32 free throws compared to Louisville’s 11.

The Tigers went on a 12-0 run late in the first half of play. The run sparked Clemson to a 31-25 lead at intermission. The Clemson defense was also hot, holding Louisville to 36 percent shooting. The Cardinals’ top two leading scorers, Damion Lee and Trey Lewis, were only 2-15 from the field combined in the opening half. They finished just 5-31 overall and 1-18 from three.

The second half of play showcased some exhilarating moments from the Tiger offense. The Well was rocking multiple times, none more so than on a fastbreak steal and slam by six-foot tall Jordan Roper. His dunk made it 43-29 in Clemson’s favor. The Tiger defense remained dominant, forcing Louisville to an 0-15 start from three-point range until 3:38 to play when Lewis finally took the lid off for the Cards. Louisville made it interesting late when Jaylen Johnson converted consecutive three-point plays and Lewis was fouled with 5.5 seconds left. He made two free throws to cut the lead to 64-62, but Holmes calmly sank his final two shots at the charity stripe to seal the win.

Clemson returns to action in Bon Secours Wellness Arena on Wednesday, playing host to the defending NCAA Champions from Duke. The Tigers and Blue Devils tip off at 7 p.m. in a game televised by ESPN2.