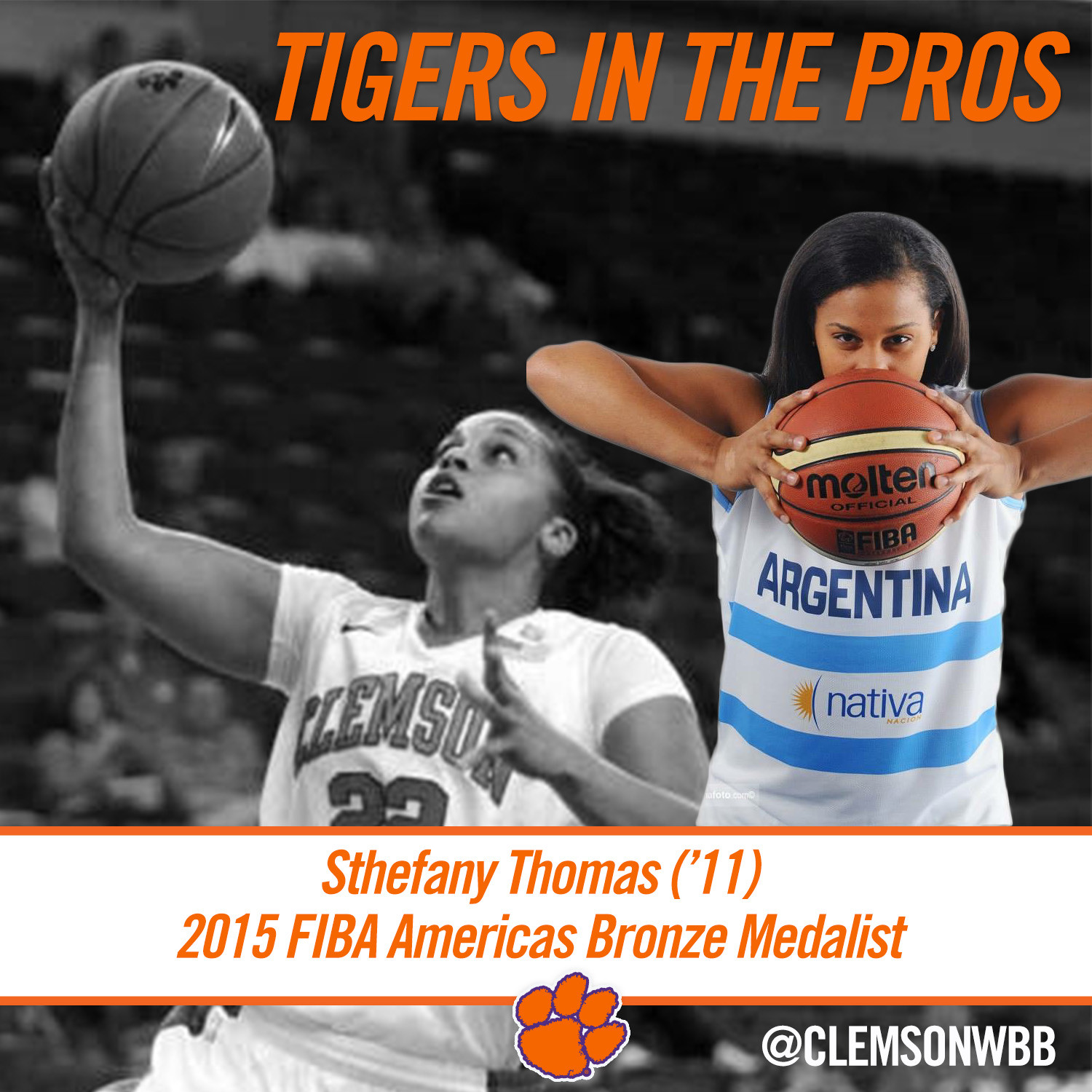 Tigers in the Pros: Sthefany Thomas

After a stellar four-year career for the Clemson Lady Tigers, Sthefany Thomas graduated from Clemson in 2011 and began her professional basketball career.

Thomas has played professional basketball in Norway, Australia, Portugal, Argentina and Brazil. She is also a member of the Argentinian National Team and has been since 2008.

ClemsonTigers.com caught up with Sthefany and asked her a few questions about her experiences playing basketball overseas.

Q: What was it like to play in Norway?

“I started my career off in Norway. It was really, really cold and there was a lot of snow all the time. I had a pretty successful first season and my team won the league Championship.”

“I always try to build relationships where I go and I still have really good friends in Norway I can go back and visit. Their language was a little hard to understand but everyone also spoke English, so it was not that hard to communicate.”

Q: How was Australia?

“I went straight to Australia following my 8-9 month season in Norway so I did not come home for an entire year. Australia was one of the prettiest countries I’ve ever been to. The people were awesome and seeing kangaroos in real life was pretty cool.”

“I lived with a host family in Australia and they were amazing. The family’s two young kids became like my brother and sister and they actually came to visit me the following year in the States.”

“The most recent country I played in was Brazil. It was an amazing experience because I got to play with a bunch of WNBA players and compete at a high level. I felt like I was being pushed every game and really grew as a player and a person while in Brazil.”

“I really enjoyed interacting with the youth in Brazil and reaching out to the community. We had kids asking for our jerseys and autographs so it was a blessing to be able to touch so many people and show them a good example.”

Sthefany is a duel citizen in both the United States and Argentina. She has played for the Argentinian National Team in 10 international tournaments. Most recently, she represented Argentina in the 2015 Pan American Games and the 2015 FIBA Americas Tournament this past summer.

Q: What does it mean to put on an Argentina jersey and represent your country?

“It’s always an awesome experience to be able to represent your country and to try to put your country on the map. You’re not playing for a club, college or university but for everyone back home. When they call out your name and everybody is lined up and they play the national anthem, I get goose bumps every single time. It’s an honor and a blessing to be able to play for your country.”

Q: What was it like to play in the 2015 Pan American Games in Toronto?

“It was one of the best tournaments I have ever had with the Argentinian National Team. It was amazing. Toronto is beautiful and they set up the whole city for the Games. When you first get there you check into an athlete village and there is so much to do there. On the last day we got to sight see a little bit in Toronto and we got a chance to go to Niagara Falls. It was overall a really cool experience.”

Q: Are you and the Argentinian National Team in the process of qualifying for the 2016 Olympic Games in Brazil?

If Thomas and the Argentinian National Team can qualify for the 2016 Olympics, she would become the second Lady Tiger to compete in the Olympics. Former Clemson player and Coach Itoro Coleman played for the Nigerian National Team in the 2004 Olympics in Athens, Greece.

Thomas will play for a Brazilian club in the 2015-16 season before joining the Argentinian National Team for the Olympic qualifying tournament in France next summer.