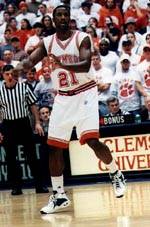 Tigers In The NBA

CLEMSON, S.C. – For the first time in history, Clemson has seven former players in the NBA in the same season. The list includes four former Clemson centers, a point guard, a two guard and a small forward. The previous high for former Tigers in the NBA was six.

Leading the way has been Dale Davis, who is in his ninth year with the Indiana Pacers, his seventh year as a starter. Through 40 games, Davis was averaging 11.7 points and 10.1 rebounds per game. He was fifth in the NBA in field goal percentage through games of January 22 with a .518 figure. He was also eighth in the league in rebounding and 17th in double-doubles with 14. What is most impressive is his much improved free throw percentage (.707), highest of his career. He is one of just nine players in the NBA averaging a double-double.

Elden Campbell is the highest scorer among former Clemson players in the NBA. Campbell was averaging 12.5 points a game in 31 minutes a game for the Charlotte Hornets. He was also pulling in 6.9 rebounds a game and was 17th in the league in blocked shots.

The veteran of Clemson’s group in the NBA is Horace Grant. A rookie with the Chicago Bulls in 1987-88, he played on three World Championship teams with that franchise. After a four-year stint with the Orlando Magic, he is now with the Seattle Supersonics. He has started all 38 games this year and averaged 36 minutes per game. He is averaging 8.4 points and 8.7 rebounds per game.

Chris Whitney is in his sixth year with the Washington Wizzards as a backup point guard. He had 17 points in his third game of the season and also had a double-double this year against Seattle. Whitney is a career 80 percent free throw shooter.

Devin Gray replaced Charles Barkley on the Houston Rockets when the future Hall of Famer was injured in December. He has played in four games for the team. Greg Buckner joined the Dallas Mavericks after the first of the year and has played 18 minutes a game over the last five outings. Harold Jamison has played in one game for the Miami Heat. The 1998-99 Clemson senior is currently on injured reserve.