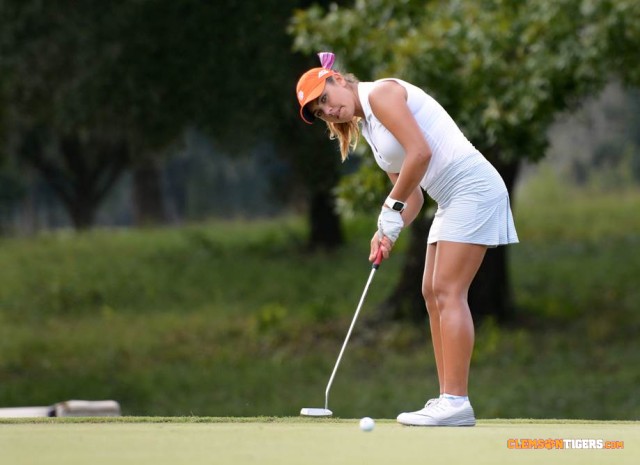 Sunset, S.C.—Sydney Legacy had her second consecutive 68, and teammates Ana Paula Valdes and Alice Hewson also shot in the 60s on Saturday to lead Clemson to a school record 276 team score and a second-place standing entering the final round of the Clemson Invitational. The three-day 54-hole event is being playing at par 72 The Reserve at Lake Keowee Golf Club in Sunset, S.C.

Clemson is in second place with a 559 team score after two rounds, 17 under par. Only seventh-ranked Furman is ahead of the Tigers with a 550 score, 26-under-par. Clemson is ahead of nine other top 50 teams from around the nation.

Michigan State, ranked 11th in the nation, is in third place at 561, while Ohio State is fourth at 566. Vanderbilt and Wisconsin are tied for fifth at 573 in the field of 15 teams from around the nation.

Clemson’s 276 team score broke the school record of 277 set earlier this year at the Schooner Fall Classic in Norman, Okla. Clemson’s 12-under-par score was the best in Clemson history versus par by five shots.   This also marked just the second time in Clemson history the Tigers had three players in the 60s in the same round.

Legacy stands in second place, trailing only Reona Hirai of Furman, who is one shot better at 135.

Valdes also had a 68 on Saturday, a big improvement over her opening round 76. Valdes tied the Clemson record for birdies in a round with seven, as she improved from 64th to 28th place in the standings.

Hewson had a 69 after her opening round 70. The junior All-ACC player played the last 12 holes on Saturday in five under par. She is in ninth place after two rounds with a 139 total.

Marisa Messana was a fourth Clemson player under par on Saturday with a 71 that included three birdies and two bogeys. It was her second under-par round of the year.

Play concludes on Sunday with the third and final round at the Jack Nicklaus designed course. Results are available at golfstat.com.