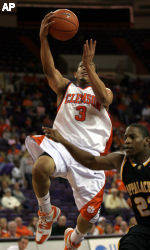 CLEMSON, S.C. (AP) -K.C. Rivers came off the bench to score a career-high 24 points, leading Clemson to a 79-49 win over Appalachian State on Friday night.

Clemson shot 67 percent from the field in the first half, while the Mountaineers (1-1) shot just 21 percent, making just five baskets to trail 39-13 at the break.

The Tigers had 46 rebounds – 14 more than Appalachian State – and scored 44 points in the paint compared to 20 points inside for the Mountaineers.

Clemson’s 30-point final margin was its biggest lead of the game.

Rivers made nine of his 13 shots, including six of nine 3-pointers. The sophomore reserve is the only Tiger to score in double-figures in all five of Clemson’s games.