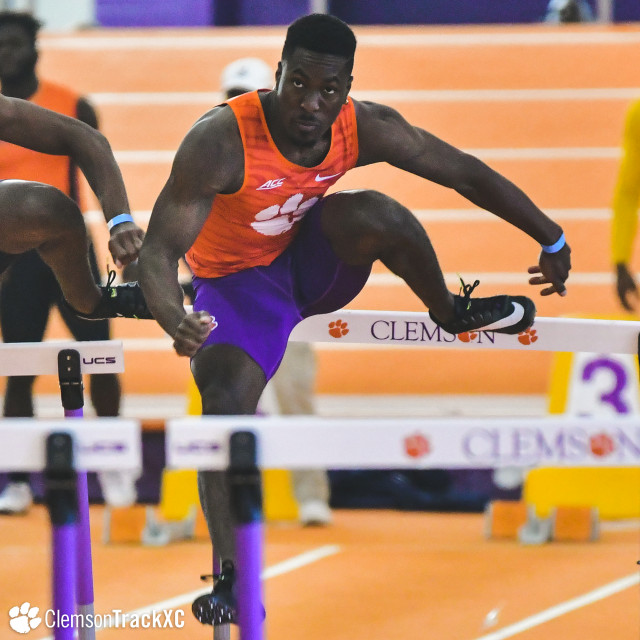 In the 60m hurdles, senior Kirk Lewis and junior Markeeta Thomas swept titles for the Tigers. Lewis crossed the finish line in 8.02, while Thomas’s 8.48 earned her her second 60m hurdle title of the 2017-18 season.

Sophomore Alex Sands won the men’s 200m with a time of 21.26 in his first appearance in the 200m this season. The Covington, Ga., native’s time overtook the previous ACC best in the event and ranks 11th in the NCAA. Sands also placed fifth in the 60m dash Saturday.

Four Tigers posted placed in the top-five of the women’s 800m, including newcomer Fellon Ferguson who won the event in her first-ever meet as a Tiger with a time of 2:08.41. Grace Barnett (2:09.09) and Kamryn McIntosh (2:10.06) rounded out the top-three behind Ferguson in, respectively. Ferguson, Barnett and McIntosh currently sit atop of the ACC performance list in the event. Among NCAA competitors, Ferguson ranks fourth, Barnett sixth and McIntosh 11th.

Junior John Lewis, the reigning ACC Track Performer of the Week, continued to impress in his 2017-18 campaign, winning the men’s 800m and claiming another first-place finish for the second straight week. Lewis’s time of 1:49.22 in the 800m is good for No. 1 in the ACC and fourth in the NCAA.

Three personal records were achieved in the 3000m. Senior James Quattlebaum claimed the men’s 3000m title with a career-best 8:18.76. Quattlebaum edged Texas A&M’s Jacob Perry by .05 seconds to give him the nod. Quattlebuam’s time in the event is the fastest in the ACC. On the women’s side, freshman Logan Morris (9:47.55) placed third. Junior Elizabeth Dawson (9:54.62) and senior Marketa Marcanikova (9:54.94) achieved personal bests in the event.

Seniors Jeffrey Green and Alex Lamb placed second and fourth, respectively, in the men’s 400m. Green achieved a time of 46.76, which is the top time in the ACC and No. 8 in the NCAA. Lamb’s time of 47.18 is good for second in the ACC and 12th in country.

On the women’s side, Olivia James (54.93) notched second place in the women’s 400m and Clemson newcomer Kendra Clarke (55.21) placed fifth in her first-ever meet in a Clemson uniform.

Up next, the Tigers return home Friday for the Clemson Invitational (Jan. 19-20). Live results for this weekend’s meet can be accessed on clemsontigers.com.