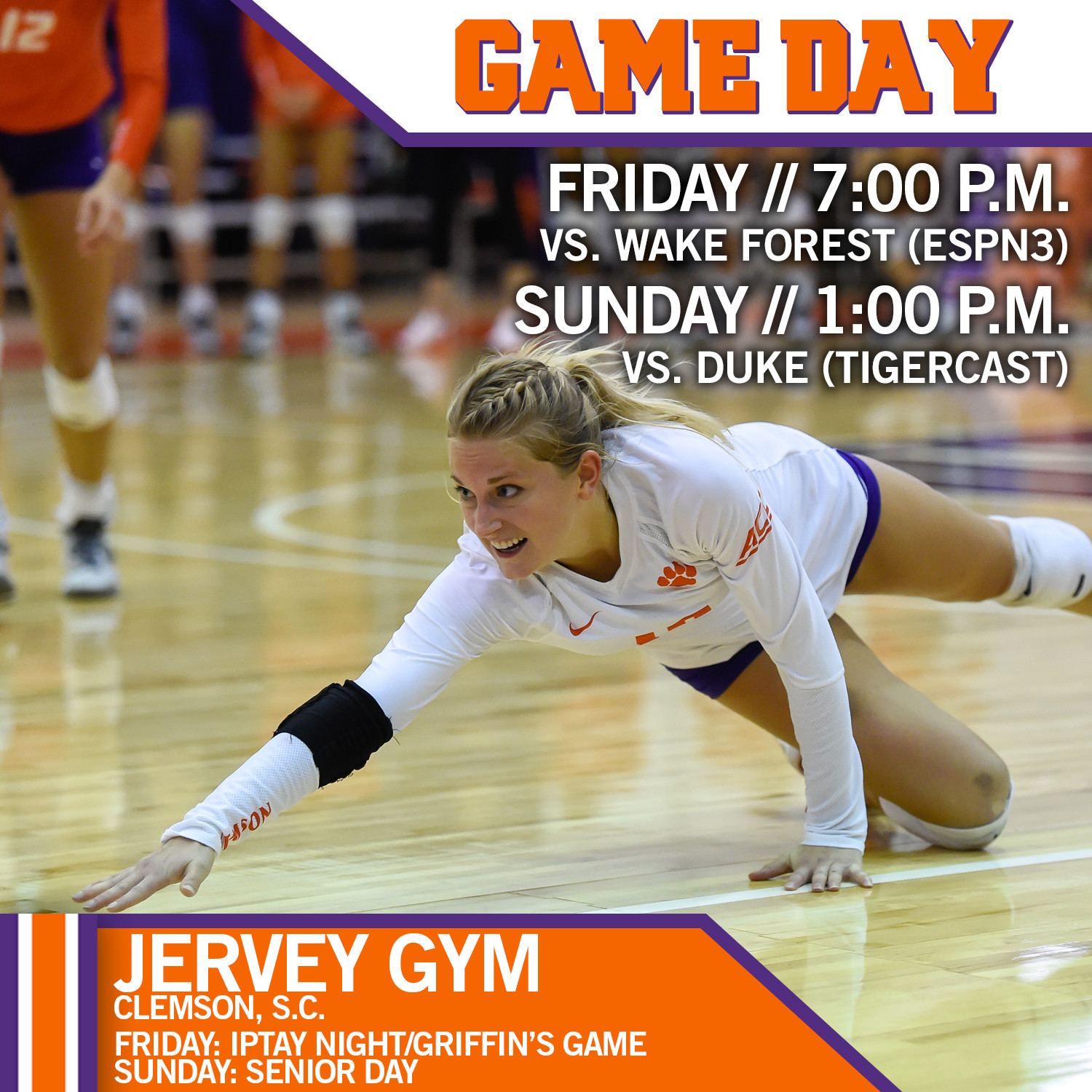 CLEMSON, S.C. – The Tigers have an eventful weekend ahead of them in Jervey Gym between their matches on Friday and Sunday. Friday, Clemson welcomes Wake Forest for its annual IPTAY Night. Both teams are also coming together to dedicate their match to a friend in need.

Last March, Kennesaw State’s Keith Schunzel and his wife Briana were told their son Griffin was diagnosed with leukemia. In an effort to help a friend in their fight, the Hernesman’s and Ken Murczek of Wake Forest are dedicating their match to Griffin with hopes of raising donations to support the Schunzel family in their battle against cancer.

Fans attending Griffin’s Game on Friday night at 7:00 p.m., will have the opportunity to donate to the cause. You can also make a difference and learn more about the Schunzel family at gofundme.com/schunzel.

Sunday’s match against Duke at 1:00 p.m., the Tigers will recognize their seniors as part of its annual Senior Day. Keelie Arneson, Lou Davis and Alex Lynch will each be recognized as they will graduate in the spring of 2016.

Keelie Arneson and Leah Perri had 14 digs and 14 kills respectively in the final two sets, each finishing with on of their best conference efforts of the season. Perri recorded a double-double with 22 kills and 13 digs. Arneson finished with 22 digs and two key aces for back-to-back points to win the third set 25-22. She is now 12th all-time in NCAA history with 2,539 career digs.

“I think the team needed that more than anything and I think that helped this week in practice,” said head coach Hugh Hernesman. “We watched some film on Tuesday and I think that opened some eyes to some things we could improve on. So I think it gave our team a different perspective on their capabilities and their potential.”

“I think it gave us another level of drive. As the season goes on, invariably with any program, you stop taking repetitions with true intent and I think that every once in a while you need the staff to remind you of some of the things you’re working on or that you’re striving for. So, I think we had a lot of focus and a lot of players were working on different aspects of their game even if it was during a drill that wasn’t designed for that.”

Notes (in 140 characters or less)   • Clemson’s eight freshmen is the highest total in the Atlantic Coast Conference.• Freshmen have combined for a total of 328 sets. Sophomores, juniors, seniors and graduate students combine for 440.• Freshmen have accounted for 45% of Clemson’s kills and 43% of its attacks.• Hugh Hernesman is the ninth head coach in Clemson volleyball history.• 46 is the magic number as Keelie Arneson is 46 digs from the 10th most in NCAA history, Leah Perri is 46 kills away from 1,000 career kills.• Keelie Arneson’s 15 digs against #17 Florida State broke her into the NCAA’s list of all-time career dig leaders.• Keelie Arneson is the NCAA’s active career digs leader with 2,539 digs. The total ranks her 12th all-time in NCAA history.• Keelie Arneson is the 36th Clemson student-athlete to be recognized as one of the NCAA’s career leaders in a statistical category.• If Keelie Arneson duplicates her ‘13 performance (712 digs) she will have the second most digs ever recorded in D-I women’s volleyball.• Keelie Arneson ranks 23rd in NCAA history with a career 5.31 digs per set average.• Keelie Arneson currently leads the ACC with a 4.95 digs per set average and is second with 406 digs.• Keelie Arneson’s 4.95 digs per set average ranks her 31th in the nation and is the fourth best average in a power five conference.• Leah Perri recorded her 900th career kill against Pittsburgh.• Leah Perri headlines the Clemson attack with 301 kills in 2015 which is the seventh most in the ACC.• Leah Perri ranks eighth in the conference with a 3.58 kills per set average.• Leah Perri is ninth in the ACC with 339.0 points and is seventh with 4.04 points per set.• Leah Perri has double-digit kills in 17-of-24 matches this season.• Kate Federico ranks seventh in the conference averaging 8.55 assists per set.• Kate Federico ranks 10th in the conference with 607 assists.• Kate Federico has eight double-doubles this season and 11 matches with 30 assists or more.• Kate Federico’s 1,171 assists last year are the second most ever recorded by a Clemson freshman.• Kate Federico’s 1,171 assists in 2014 was the second highest total in the ACC and the most recorded by a freshman.• Kailey Harvell has recorded 10 or more kills in 11 of Clemson’s 24 matches this season.• Kailey Harvell is second on the team and not far behind Leah Perri with 226 kills and a 2.76 kills per set average.• Kailey Harvell hit .484 on the outside (16-1-31) against Miami.• Kailey Harvell is credited with a career best 17 kills, and five aces to go along with eight digs against Syracuse.• Kennedy Wilson-Talmadge recorded her first career match with 10 digs or more, digging 16 ball against Syracuse.• Kennedy Wilson-Talmadge has 115 digs in 69 sets, which is the most digs of Clemson’s reserves.• Kennedy Wilson-Talmadge is three digs away from the fifth highest total on the team with nine fewer sets.• Freshman, Kennedy Wilson-Talmadge recorded her 100th career dig against Pittsburgh.