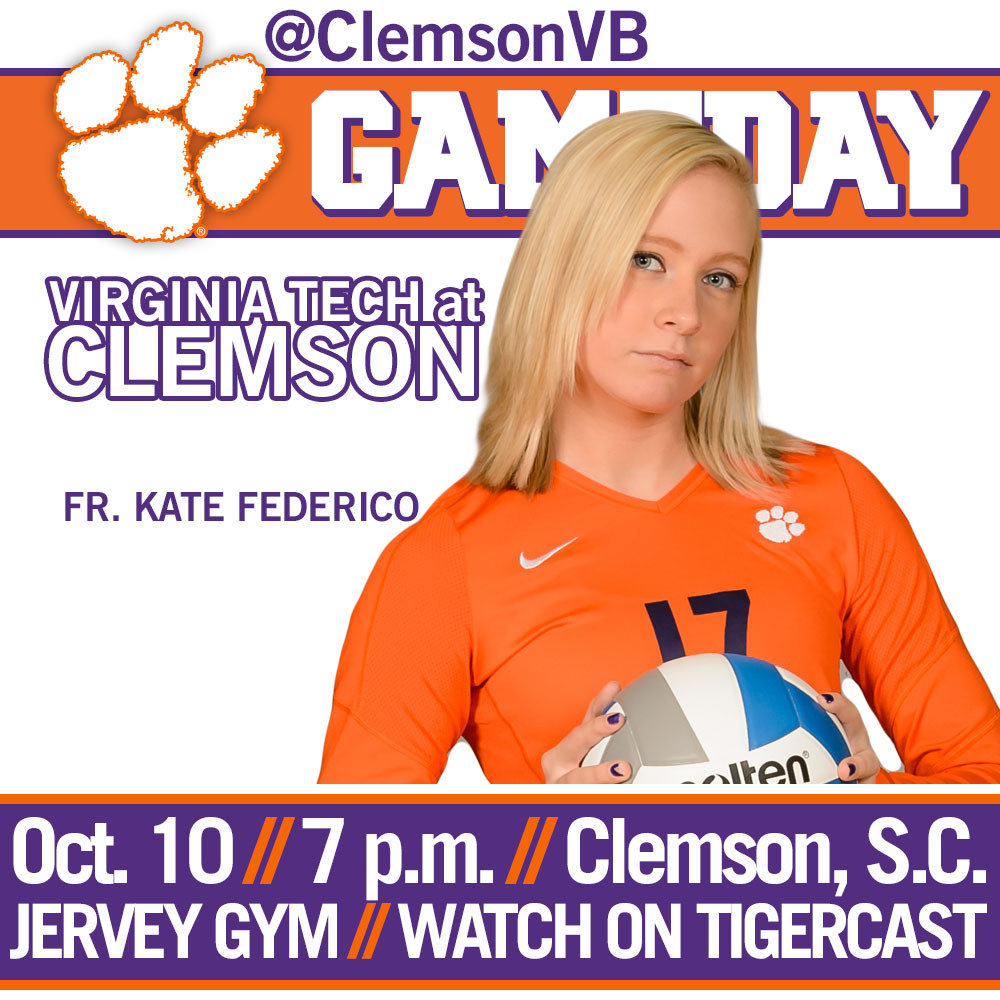 CLEMSON, S.C. – Clemson hosts two ACC home matches in Jervey Gym this weekend. The Tigers host Virginia Tech on Friday, Oct. 10 at 7 p.m., followed by Georgia Tech on Sunday, Oct. 12 at 3 p.m. Admission to Clemson home volleyball matches is free, and both of this weekend’s matches will be broadcast live via TigerCast on ClemsonTigers.com.

The Tigers are 11-5 on the season and 0-3 in the ACC, most recently falling to #12 North Carolina 3-0 in Jervey Gym last Sunday. Senior Kristin Faust (3.65) and sophomore Leah Perri (3.05) continue to lead the Tigers in kills per set. Freshman setter Kate Federico continues to climb in the record books as she is now up to 582 assists for a 9.86 per set average.  She is 170 assists away from Hannah Brenner’s 752 assists, which rank fourth among all freshmen in Clemson history in terms of single season sets. Federico also leads the way in aces for the Tigers with 18 on the season.

Senior Karis Watson’s 1.47 blocks per set rank 18th in the nation in that category. Senior Niki Collier leads the team in digs with 3.34 per set, followed by Faust in second with a 2.80 average.

Scouting Virginia TechVirginia Tech comes to Jervey Gym sporting an 8-8 record and a 1-2 mark in conference play. The Hokies are led by Lindsay Owens in kills per set (3.64) and Megan Beckwith in digs per set (3.10). Ashley Battle ranks first on the team in blocks per set with a 1.13 average. Jordan Fish and Kyra Coundourides handle the setting duties for Virginia Tech, averaging 6.52 and 4.73 assists per set, respectively.

Scouting Georgia TechGeorgia Tech is currently 8-9 overall and 1-3 in the ACC, however, they face NC State in Atlanta on Friday prior to heading to Clemson for Sunday’s match. The Yellow Jackets are led in kills per set by twins Teegan and Annika Van Gunst with 3.63 and 2.89, respectively. London Ackerman leads the team in digs with 3.77 per set, while Sydney Wilson is first in blocks per set (1.05). Rebecca Martin (9.38) leads the Jackets in assists per set, with a 9.38 average.

Clemson and Georgia Tech have met 62 times on the court with the Tigers winning 37. Home court has been an advantage for the Tigers, as they lead the series 19-10 in terms of matches played in Jervey Gym.