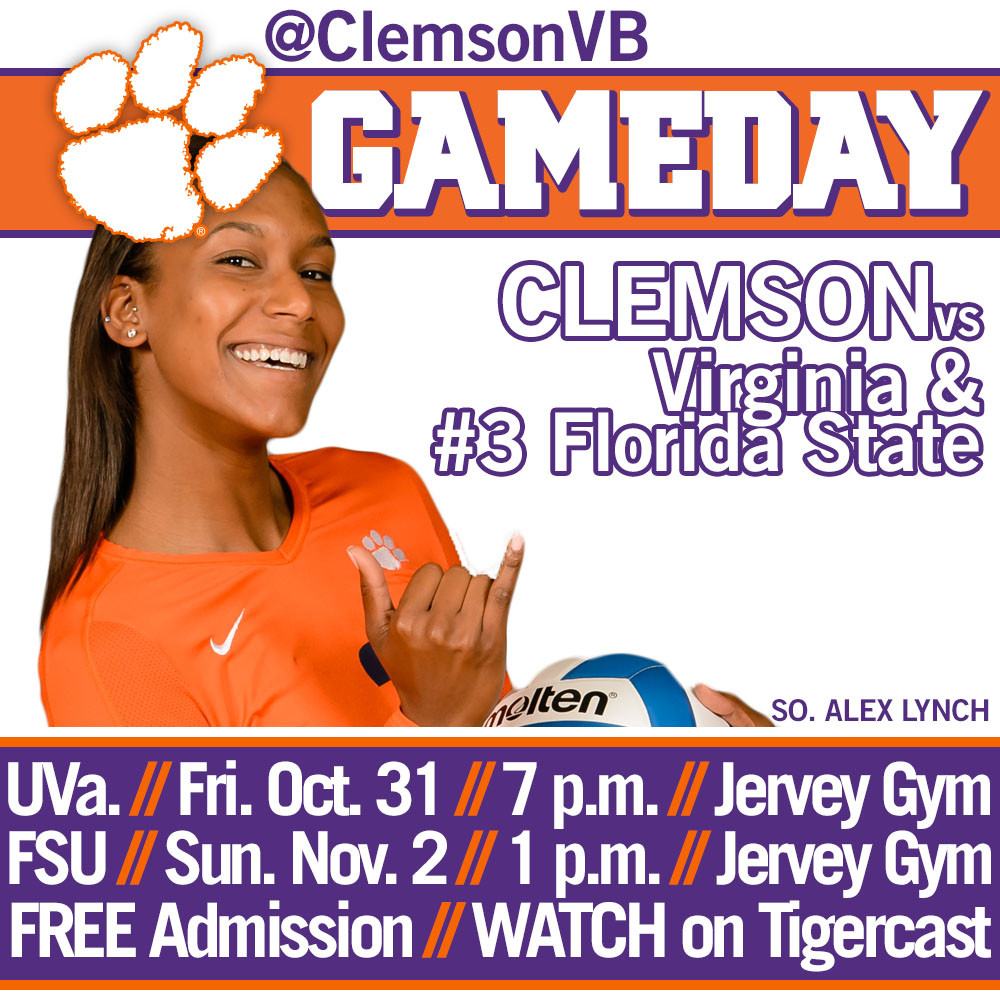 CLEMSON, S.C. – The Clemson volleyball team hosts two ACC opponents this weekend, beginning with a Friday, Oct. 31 contest against Virginia at 7 p.m. in Jervey Gym. On Sunday, Nov. 2, third-ranked Florida State comes to town for a 1 p.m. match. Both contests will be broadcast live on TigerCast on ClemsonTigers.com. Admission to all regular season home volleyball matches is free.

Kristin Faust and Leah Perri continue to lead the offense with 3.48 and 2.90 kills per set, respectively. Kate Federico is averaging 9.72 assists per set and has 846 assist on the season, good enough for fourth place in school history in terms of assists in a single season by a freshman. The rookie setter needs just 19 more assists to move into the number-three spot in school history in that category. Niki Collier leads the Tigers’ backcourt defense with a 3.48 digs per set average.

Virginia comes to Clemson sporting a 13-9 overall record and a 6-3 mark in ACC matches, which puts them in sixth place in the conference standings. The Cavaliers are led in kills per set by Tori Janowski (2.99) and Kayla Sears (2.97), while Lauren Fuller averages 10.73 assists per set, which ranks third in the ACC. Defensively, Natalie Bausback leads the team in blocks per set (1.04) and Lexi Riccolo ranks first in digs per set (2.93).

Third-ranked Florida State enters the weekend as one of only four undefeated teams in the country, with a 21-0 overall record and a 9-0 record in conference play. The No. 3 national ranking is the highest AVCA ranking ever for an ACC volleyball program. The Seminoles face NC State on Friday prior to traveling to Clemson on Sunday.

Nicole Walch leads Florida State in kills per set (4.05). Setters Sarah Wickstrom and Hailey Luke average 6.33 and 5.05 assists per set, respectively. Sarah Burrington ranks first on the team in blocks with 1.49 per set, and sits just behind Watson in second place in the ACC statistical rankings in that category. Katie Mosher averages 4.25 digs per set to lead the Noles’ backcourt defense.

Florida State and Clemson have played 50 times over the course of the series and the Tigers have a 19-31 all-time record, and an 11-12 mark in matches played in Jervey Gym. Sunday’s contest is the first of two matchups with Florida State this season, as the Tigers travel to Tallahassee over the Thanksgiving holiday.