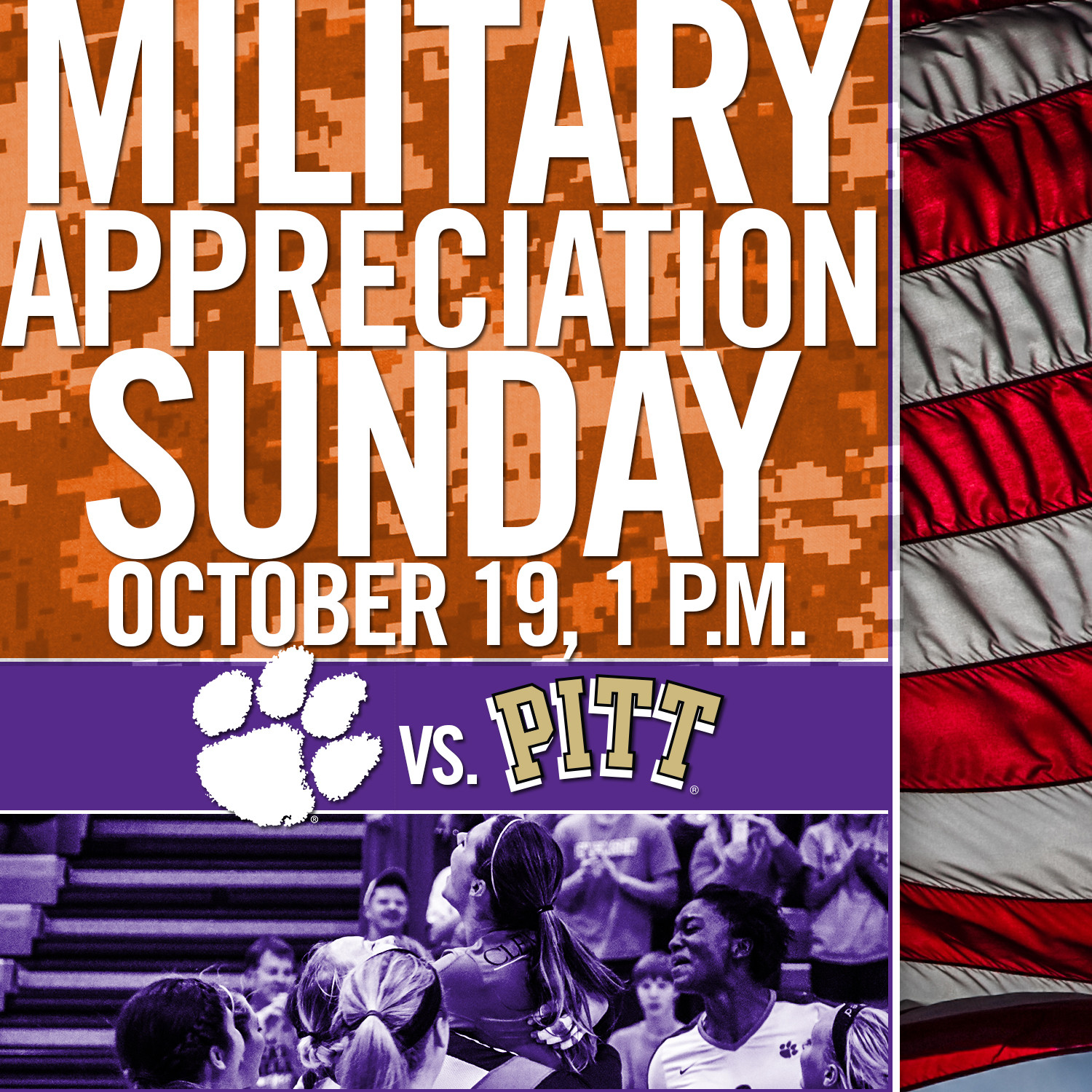 CLEMSON, S.C. – Two days after claiming the 800th win in program history, Clemson returns to Jervey Gym on Sunday, Oct. 19 to host Pittsburgh at 1 p.m. in a game designated as Military Appreciation Day. The match will be televised on RSN. A list of RSN affiliates carrying the match is available at the link above. Admission to all regular season home volleyball matches is free.

The Tigers (14-5, 3-3 ACC) are looking for their fourth consecutive win on Sunday, after they downed Virginia Tech and Georgia Tech last weekend, and defeated Notre Dame on the road Friday. The win over the Irish was the 800th win in program history, and the program now has an 800-519 all-time record. Clemson is the sixth program in the ACC to reach 800 total wins; North Carolina, Florida State, Louisville, Duke and Syracuse are the only other conference teams to reach the milestone.

In the win at Notre Dame, sophomore Leah Perri led the team offensively, with 11 kills. Senior Kristin Faust and graduate Haleigh Hampton added nine kills apiece, while Hampton did so with just one error on 14 swings for a .571 hitting percentage. Senior Beta Dumancic posted a match-high five blocks and senior Niki Collier led all players on the court with 11 digs. Freshman Kate Federico continued to climb the freshman record books, tallying 27 assists and moving closer to fourth place in school history in terms of assists by a freshman in a single season. The rookie needs 54 assists to pass Hannah Brenner’s 752 assists in that category.

Pittsburgh is 16-2 overall and 4-1 in conference play after sweeping Georgia Tech in Atlanta on Friday evening. Jessica Wynn leads the Panthers with 208 kills on the season. Delany Clessen has a team-best 282 digs and Jenna Potts leads the team in blocking with 83. Pittsburgh is also looking for its fourth straight win on Sunday.

The Tigers and Panthers have only met twice on the volleyball court. The first meeting was a 3-1 Clemson win in 1997 at the Auburn War Eagle Invitational. Pittsburgh won last season’s match by a score of 3-0 on its home court. Sunday’s match will be the first ever between the two teams in Jervey Gym.

MILITARY APPRECATION DAYIn honor of Military Appreciation Day, the U.S. Marine Corps will set up a display in the lawn outside the entrance to Jervey. An Officer of the U.S. Marine Corps, Gunnery Sergeant Greene, will speak to the Tiger team before the game and will also perform the honorary first serve. The Tigers are raising awareness for the Wounded Warrior Project. For more information, visit: http://www.woundedwarriorproject.org/.