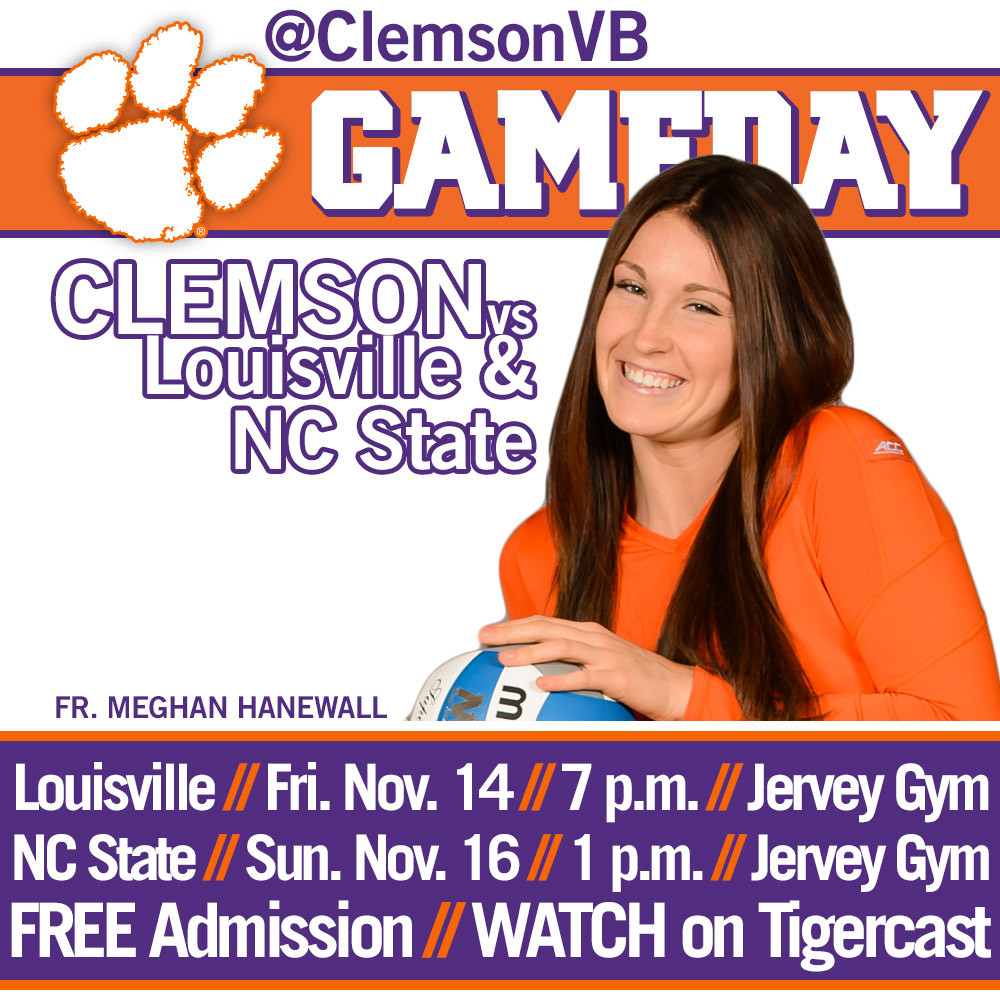 CLEMSON, S.C. – The Clemson volleyball team begins a stretch of three consecutive home games this weekend, as it hosts Louisville on Friday, Nov. 14 at 7 p.m. The Tigers then host NC State on Sunday, Nov. 16 at 1 p.m. in Jervey Gym, prior to their home finale, which will be Sunday, Nov. 23. Both of this weekend’s matches will be broadcast live on TigerCast on ClemsonTigers.com, and admission is free and open to the public.

The Tigers are 17-10 overall and 5-8 in the Atlantic Coast Conference, most recently defeating Syracuse 3-1 and falling to Boston College 3-0 on a road trip last weekend. The team continues to have a strong defense, holding opponents to a .170 hitting percentage which ranks third in the ACC.  The Tigers also lead the conference in total blocks (299) and rank third in blocks per set (2.90). Individually, seniors Karis Watson and Beta Dumancic rank third (1.49) and ninth (1.19) among all ACC players in blocks per set. Watson’s figure ranks eighth in the nation, while her 153 total blocks put her in second nationally.

Clemson’s offense is led by senior Kristin Faust and sophomore Leah Perri with 3.41 and 3.01 kills per set, respectively. Faust currently ranks eighth in the ACC in that category. Freshman Kate Federico ranks fifth in the league with her 9.77 assists per set this season. The rookie is now just 111 assists away from moving into second in Clemson history in terms of single season assists by a freshman. Niki Collier leads the team in defensive saves, averaging 3.50 digs per set which ranks ninth in the conference.

SCOUTING LOUISVILLELouisville is 14-11 overall and 6-7 in the ACC, most recently falling to Miami and Notre Dame on the road last weekend. The Cardinals are led by Janelle Jenkins with a 3.10 kills per set average, while setter Katie George averages 10.12 assists per set, which ranks just ahead of Federico at fourth in the ACC. Roxanne McVey is seventh in the ACC in digs with 3.96 per set, and Tess Clark, who is tied with Dumancic for ninth in the conference, averages 1.19 blocks per set. Both players lead the Cardinals defensively.

The Cardinals will be making their first ever trip to Clemson on Friday. Louisville holds a 2-0 all-time advantage in the series, however the two teams have not met on the volleyball court since 1994.

SCOUTING NC STATENC State (14-10, 3-9 ACC) is coming off a 3-0 win over Georgia Tech in Raleigh last weekend, and faces North Carolina on Thursday night prior to heading to Tigertown on Sunday. The Wolfpack is led by Kaitlyn Kearney, who averages 2.73 kills per set, while Maggie Speaks runs the offense with 9.19 assists per set. Defensively, Alston Kearns leads the team in digs per set (3.01) and Kearney averages 1.18 blocks per set, which is best on the team.

Clemson holds a 38-21 all-time advantage in the series, including a 20-5 record in matches played in Jervey Gym. The Wolfpack won last season’s meeting between the two teams, a 3-0 sweep of the Tigers in Raleigh. Faust posted 13 kills in the contest and Irem Bayramoglu led the team with 11 digs, while Dumancic hit .545 with seven kills in 11 attempts and just one error.