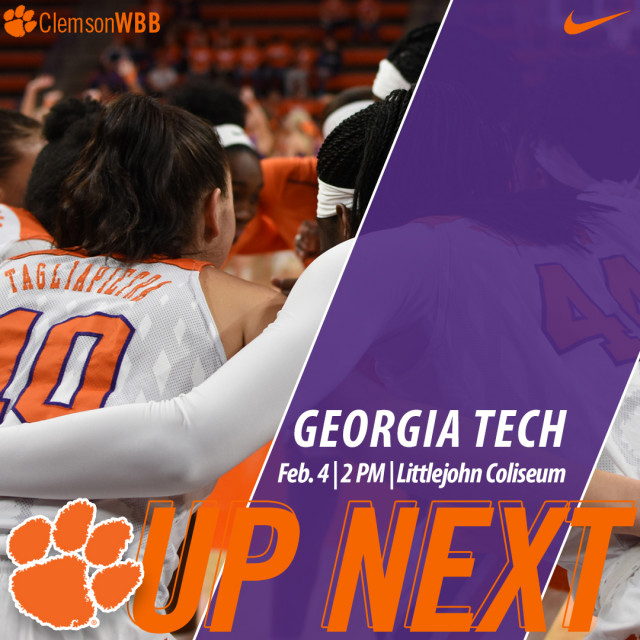 – Members of the Clemson women’s soccer and volleyball teams will host a free sports clinic for all children ages 12 and under.

– All participants should enter the coliseum through the Burton Gallery entrance.

– All participants will also receive a free t-shirt and pizza.

– The Tigers (11-12, 1-9 ACC) are coming off of a 58-42 loss to Pittsburgh on Thursday, Feb. 1 at Littlejohn Coliseum. Sophomore Kobi Thornton led the team with 15 points and eight rebounds, and junior Danielle Edwards pulled down a season-high 10 rebounds in the contest.

– Thornton leads the Tigers in scoring overall and in ACC play. The 2017 ACC All-Freshman Team selection is averaging 10.4 points per game on the season, and 12.8 points per game through the Tigers’ first 10 ACC games.

– Edwards’ 59 steals and 2.6 steals per game rank third among all ACC players. On Nov. 13, 2017, Edwards posted nine steals in the Tigers’ 56-48 win over South Carolina State, tying the Clemson record for steals in a single game. Four different players have recorded nine steals in a game previously for the Tigers, however, it had not been done in 30 years, when Ramona O’Neil picked up nine steals against Virginia on Feb. 14, 1987.

– Clemson leads the all-time series against Georgia Tech with a 44-36 record.

– In the first meeting between the two teams this season, the Yellow Jackets won 66-33 in Atlanta on Dec. 31, 2017. Thornton and Edwards scored 10 and nine points, respectively, and Bennett led the Tigers with nine rebounds.