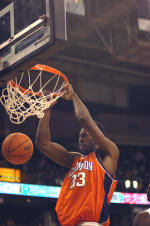 Clemson Basketball Press Conference Media PlayerEvent Download the Free Real Player.Oliver PurnellAudio Preview (10:26) A victory would give Clemson 18 wins inthe regular season for the first time since the 1996-97 season whenClemson had 21 entering the ACC Tournament. It would also giveClemson seven league wins for the first time since 1997-98.Saturday will be the final regular season appearance for ClemsonSeniors Shawan Robinson, Akin Akingbala and Steve Allen. Clemson is25-8 on Senior Day since 1972, including a 15-8 record against ACCteams. Robinson and Akingbala have both scored in double figures innine of the last 10 games. Robinson has a 15.4 average over those10 games and Akingbala is at 14.9. Robinson has made 17 of his last34 three-point attempt. Vernon Hamilton broke Chris Whitney’ssingle season steal record at Virginia Tech and now has 74 for theseason. He needs three steals against Georgia Tech to becomeClemson’s career leader. Terrell McIntyre had 194 between 1995-99and Hamilton has 192 entering Saturday’s game. Clemson has a 7-2record against Georgia Tech on Clemson’s Senior Night, but Techdefeated Clemson just two years ago on Senior Night. Clemson willbe looking for a third straight ACC win to close the season.Clemson has not entered the ACC Tournament coming off threeconsecutive league wins since 1964. Clemson’s 17 wins so far thisseason are already the most by a Clemson team since 1998-99 whenClemson finished the season with 20. Clemson has made 44 of itslast 99 three-point goals over four games and the Tigers areaveraging 83.3 points per game over those three contests. Clemsonmade 11-14 three-point shots in the second half in its win atVirginia Tech on Wednesday. That tied a school record for the mostthree-point goals made in a half by a Tiger team. Cliff Hammonds isaveraging 14.5 PPG over his last 4 games and has made 11 of hislast 22 three-point goals. He has not turned the ball over in thelast two games and has team best 89 assists. Akin Akingbala needs10 rebounds to reach 500 for his Clemson career. He needs one stealto become the first Clemson player to record at least 30 blocks and30 steals in the same year in 10 seasons. Akingbala has had fourdouble-doubles in his last seven games. Shawan Robinson needs fivethree-point goals to reach 200 for his career. He has had fivethreepoint goals in three of his last four games. Cliff Hammonds issixth in the ACC in assist/turnover ratio. He had six assists andno turnovers in the win over Virginia.