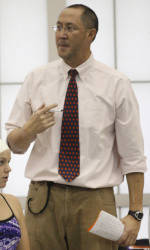 CLEMSON, SC – The Clemson men’s and women’s swimming and diving programs will host the final dual meet in program history against Emory University on Saturday afternoon at 1 p.m. in McHugh Natatorium. Admission is free to the public.

The Tiger men are 5-3 overall and 2-2 in the ACC coming into Saturday `s meet, while the Tiger women are 5-6 overall and 1-4 in conference competition. The Eagles are 2-5 on the men’s side and 3-5 on the women’s side. Emory’s women’s program is the defending NCAA Division III Champion, while the men’s program finished third in the country last season.

“Emory will be the only home meet of the season since the pool went down a year ago and our Tigers are ready to compete in their home pool again,” Head Coach Christopher Ip said. “It will also be our senior meet where we will be honoring 19 dedicated student-athletes who have rewritten Clemson’s record books. Emory is a strong foe, as their women’s team is the defending NCAA D-III national champions.

“It will be bitter sweet because it will be also be the final dual meet for the program. It is fitting that we compete against Emory one of the first teams Clemson competed against some 80 years ago.”

The Tigers are coming off of a weekend road trip to the state of North Carolina, where both teams picked up victories. The men’s team knocked off Duke, while the women’s squad defeated Richmond.

This will be the 39th meeting between the Tigers and the Eagles in men’s swimming and diving, with Clemson owning a 22-16 edge. The Clemson women’s program has won all three of its meetings with Emory.

“I am looking forward to seeing our alumni who have come back to Tigertown to honor the program,” Ip said. “The men’s and women’s teams will be prepared for this final meet, but this is not the end. We have many more team goals ahead of us to accomplish.”