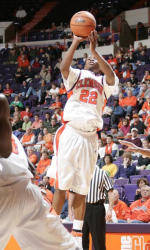 Clemson is off to a 7-0 start for the first time since the2002-03 season and just the second time since 1995-96. If Clemsondefeats ETSU it would make the Tigers 8-0 for just the 11th time inschool history. Clemson and Duke are the only remaining ACC teamsundefeated. Clemson was one of 24 undefeated teams in Division Ientering Thursday’s play. Clemson has forced 49 more turnovers thanit has committed so far this year. That computes to a +7.0turnovers per game, first in the ACC. Clemson has a 5-0 lead in theseries with East Tennessee State. The last meeting was the closestas it went to overtime. Clemson won the contest 100- 86 in 2003-04,Oliver Purnell’s first year. Clemson will take on a team coached byMurry Bartow. He is the second Bartow to face the Tigers. Hisfather, Gene, defeated Clemson for UAB in the 1993 NIT inBirmingham by a 65-64 score. Shawan Robinson needs just onethree-point goal to move into fourth place in Clemson history. Hehas 155 entering this game, the same total Tony Stockman had forthe Tigers from 2000-02. Robinson has moved into 10th place inClemson history in free throw shooting with his 16-17 effort so farthis year. He is shooting 79.7 percent for his career. He alsoleads the ACC in assist/turnover ratio. Clemson ranked 16th in theSagarin computer ranking through games of December 6. VernonHamilton had a career high tying six steals in the win overWofford. He has 22 for the season and he leads the ACC in thatcategory. Hamilton has scored in double figures in threeconsecutive games, the first time in his career he has done that.Clemson leads the ACC as a team, in steals per game and in turnovermargin. Clemson was last in turnover margin in 2003-04, OliverPurnell’s first year. James Mays is third in the ACC in offensiverebounds, sixth in rebounding and sixth in blocked shots. He hashad consecutive double figure scoring games for the first time inhis career. ETSU is in its first year in the Atlantic Sun. Theprevious five meetings in the series the Bucs were representing theSouthern Conference. Akin Akingbala played a career high 34 minutesin Clemson’s win over Wofford. The senior from Nigeria scored 14points, three blocks and added eight rebounds to go with 6-9 fieldgoal shooting. Shawan Robinson has made at least on three-pointgoal in every game this year and has an active streak of 10consecutive games over two years. Hamilton has made 50 percent ofhis FG attempts this year, up from 40.5 percent for his career.