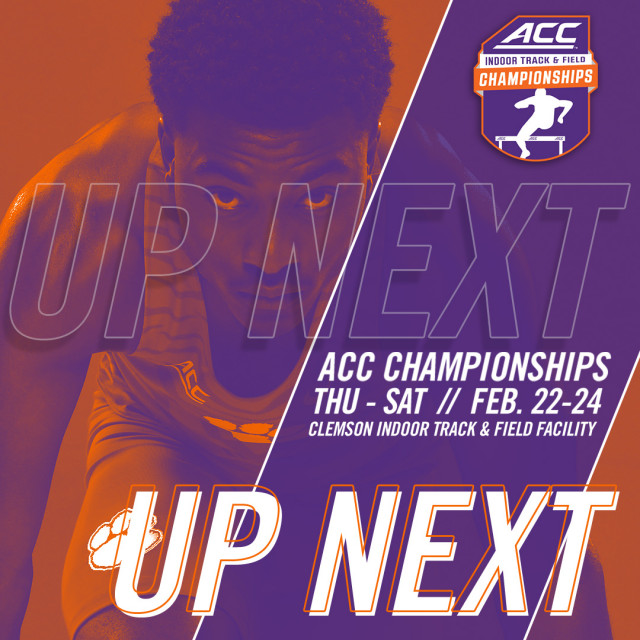 “Both of our teams are in position to win it,” said head coach Mark Elliott. “That’s our goal each year – to set ourselves up to win an ACC championship. I think everyone is ready to go. And then being at home and having that advantage, plays a good role. So, we’re all excited about it.”

The men are led by Jeffrey Green (45.87) and Cordell Lamb (46.63), who rank first and second, respectively, in the ACC in the men’s 400m dash. Green will also look to anchor the league’s top men’s 4x400m relay team, while Lamb also ranks second in the conference in the 200m (21.13). Junior John Lewis (1:49.22) ranks third in the 800m dash, as does Kirk Lewis (7.76) in the 60m hurdles. In the field, Chris McBride will look to defend his long jump title after his personal record of 7.79m earned him the gold medal at last year’s championship. Grant Voeks (16.61m) will also look to register points for the Tigers in the cage. Voeks currently holds the No. 7 mark in the ACC.

On the women’s side, Rebekah Smith (7.26) and Torie Robinson (7.27) enter as the top-2 60m dash competitors. Fellan Ferguson (2:06.42), a senior transfer from Johnson C. Smith, ranks second in the ACC in the 800m run. Olivia James (53.72) ranks third in the 400m dash. Senior Grace Barnett, who PR’d and placed second in the mile at last year’s indoor championship, will look to claim the mile title Saturday.

This year, Clemson’s banked track has seen 20 facility records set – 10 on the men’s side and 10 on the women’s – including Clemson’s Lewis in the 1000m. Additionally, two world records, two American records and one NCAA record have been set this season at the Clemson Indoor Track & Field Complex.

“Going off of the meets that we’ve hosted this year, this facility is ready. I’m happy that Clemson can play a role in hosting a really good championship.”

ACC Network Extra will live stream action the final two days, with former Olympic decathlon gold medalist Dan O’Brien serving as color analyst, reprising the role he first filled at the 2015 ACC Outdoor Championships. He will be joined by veteran ESPN play-by-play announcer Shawn Kenney and sideline reporter Hanna Yates. Coverage will air from 4:30 p.m. through 8:30 p.m. on Friday, Feb. 23, and from noon until the meet’s conclusion (approximately 4:30 p.m.) on Saturday, Feb. 24.