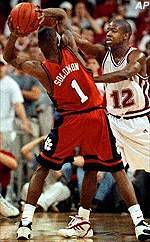 Tigers Hold On For Victory

Jurkunas, whose previous best was 21 points three weeks ago against Georgia Tech, began the comeback with a 3-pointer as the Tigers went on a 13-0 run to grab a three-point lead.

Justin Gainey’s three-point play tied it at 62-62 with 1:04 left and set the stage for the final drama.

After a Kenny Inge free throw gave the Wolfpack a one-point edge, Jurkunas was fouled by Damien Wilkins with 14.6 seconds left, and nailed both free throws.

Jurkunas then blocked a driving layup attempt by Anthony Grundy and a layup by Will Solomon sealed it.

The win was only Clemson’s 14th in 150 games on the road against N.C. State, North Carolina and Duke. Ten have now come against the slumping Wolfpack, who was led by Justin Gainey’s 17 points.

Then the wheels came off as N.C. State was outscored 17-4 down the stretch, seven straight shots at one point.

The Tigers were coming off a five-turnover effort against Maryland last Tuesday – second fewest in school history – but coughed it up six times in the opening nine minutes against the Wolfpack.

To make matters worse for Clemson, Solomon picked up a pair of fouls 21 seconds apart early in the game and was limited to five points in the opening 20 minutes as the Wolfpack led by as many as seven before settling for a 32-26 halftime lead.