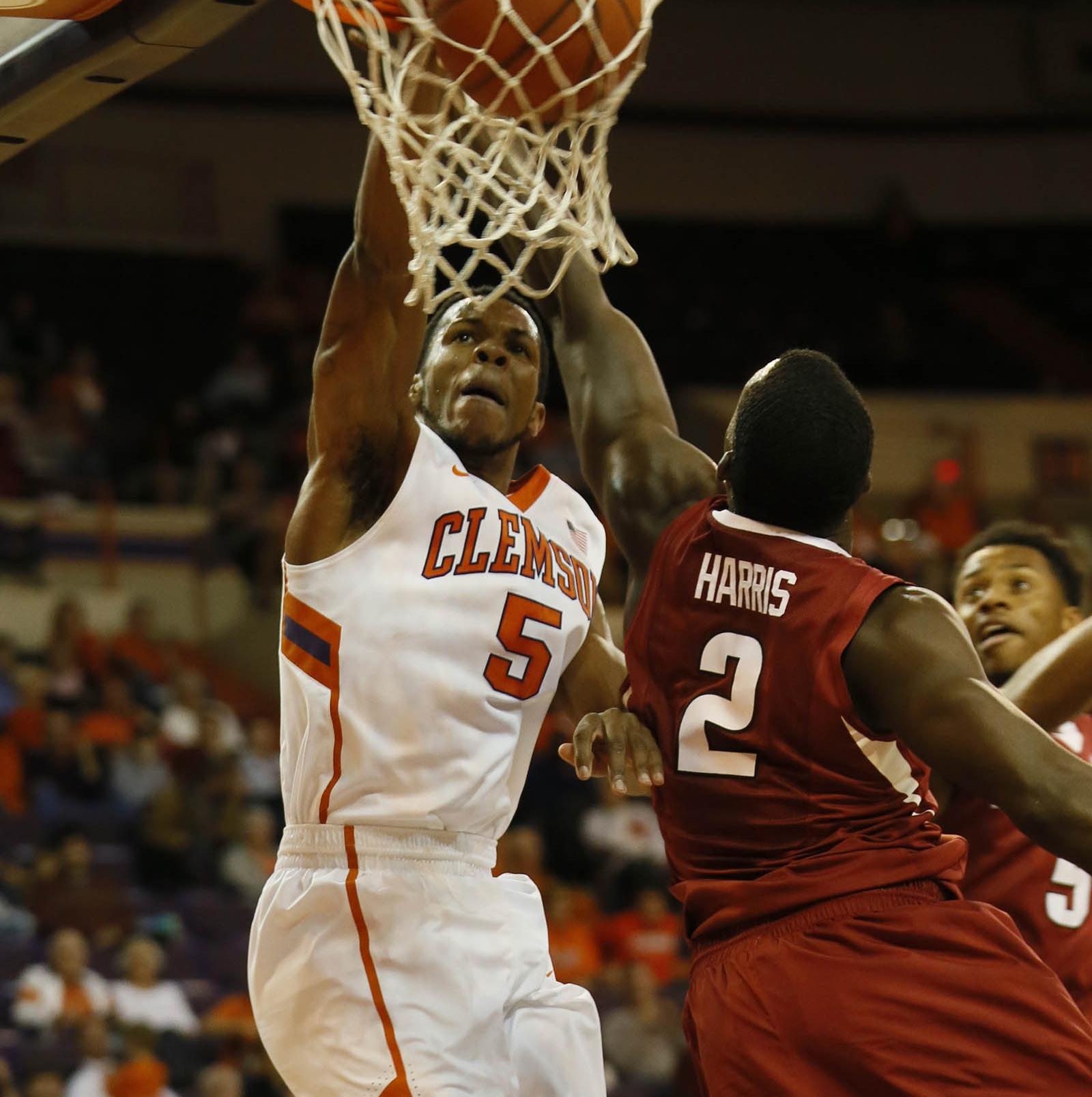 GREENVILLE, S.C. — Men’s basketball made the first of many trips to Bon Secours Wellness Arena on Tuesday, taking advantage of Clemson University’s fall break with its first intrasquad scrimmage in preparation for the 2015-16 season. The orange team, led by Jaron Blossomgame, won 70-63 over three 12-minute segments.

“It was a little chilly,” joked head coach Brad Brownell, referencing the ice under the arena floor set up for Greenville’s minor league hockey team, the Swamp Rabbits. “But it’s nice. They’ve done a great job of making it feel like a home arena. I’m excited about seeing ‘The Well’ filled on game night. We hope to play well and build some enthusiasm with our play.”

Blossomgame was one of several players that demonstrated that type of play Tuesday. The redshirt junior and leading returning scorer for the Tigers finished with a scrimmage-high 24 points. He was efficient, hitting 7-11 field goals and 9-11 at the free throw line.

Blossomgame was happy to see his orange squad post 70 points, but pointed out the Tigers have a long way to go until the regular season opens November 13 against North Carolina Central.

“Defensively, the orange team made some mistakes,” he said. “We didn’t rebound the ball as well as we wanted, but we’ll go back to the film and correct some things.”

The Tigers played 12 scholarship players Tuesday, but were without starting center Landry Nnoko, who recently suffered a death in his family. In his place, junior Sidy Djitte and sophomore junior college transfer Legend Robertin manned the post. Both players had double-doubles. Djitte stuffed the stat sheet with 13 points, 12 rebounds, four steals and three blocks.

“Sidy and Legend both did well,” Brownell said. “Sidy has really improved, and is more confident offensively. He’s always been rugged and physical, but now he’s making a few plays around the rim.”

Purple actually won the first segment, 18-17, after freshman Ty Hudson exploded for nine of his team-high 14 points. But orange came back strong in the second, winning 29-21. A highlight of segment two came when Jordan Roper picked off a pass at midcourt and threw a nifty behind-the-back bounce pass to Donte Grantham, who dunked it with his left hand for a bucket. Grantham was the No. 2 scorer in the scrimmage with 15 points on 6-12 shooting, while adding a game-high five assists.

Brownell was pleased with the work put in by both teams. With a 45-minute commute to home games for the entirety of the 2015-16 season, the sixth-year head coach wanted to simulate a game-like feel for his players.

“We’ve put enough in to be competitive in situations,” he said. “It gives us a chance to get some things on film, and teach off of it. It was important for our players to get used to the environment and routine. Players and teams are creatures of habit. We’ll do it once or twice more before playing an actual game.”

The Tigers host Lenoir-Rhyne in a free exhibition contest on Thursday, November 5, before opening the season eight days later. Tickets are on sale at ClemsonTigers.com, or by calling 1-800-CLEMSON.