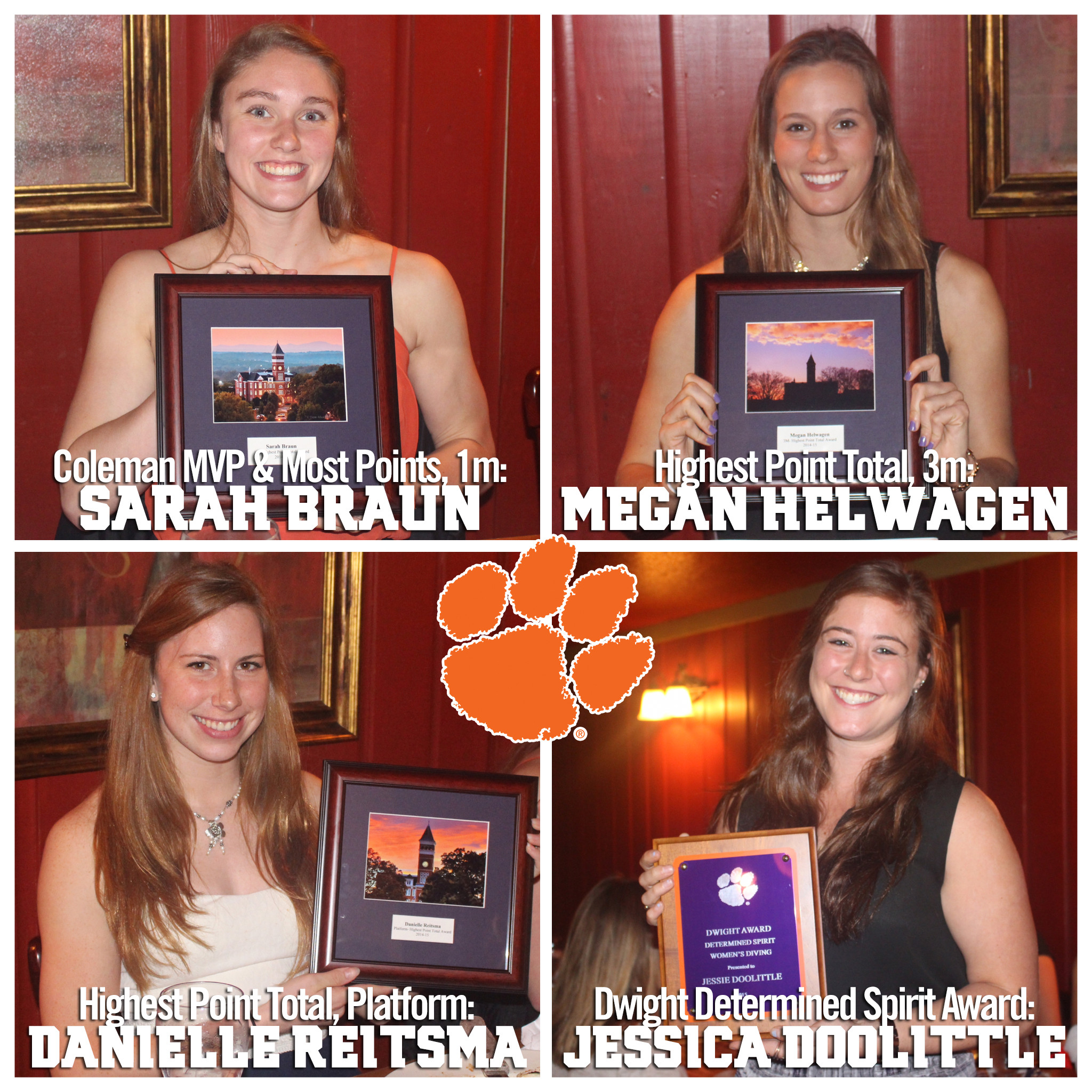 CLEMSON, S.C. – The Clemson diving program held its annual postseason awards banquet on Sunday, April 19 at the Blue Heron Restaurant in Clemson. At the banquet, Head Coach Leslie Hasselbach Adams announced the recipients of the Coleman Most Valuable Diver Award and the Dwight Determined Spirit Award, and named the divers with the highest point totals in the one-meter, three-meter and platform.

Sophomore Sarah Braun was named the Coleman Most Valuable Diver, and also recorded the highest point total in one-meter events throughout the season. Braun was also second in the platform and fourth in the three-meter in terms of point total, and scored a team-best 156 points for the year. The native of Beaverton, Ore. was the Tigers’ top finisher in the one-meter and platform at the 2015 ACC Championships, scoring 12 points toward the team total at the meet. Braun also led the team at the NCAA Zone B Championships, advancing to the finals in both the platform and one-meter, placing 14th and 18th, respectively.

Senior Jessica Doolittle was the recipient of the Dwight Determined Spirit Award, which is awarded to an individual who has displayed outstanding perseverance as a student-athlete and as a result, has achieved excellence in competition. Doolittle, from Matthews, N.C., achieved NCAA Zone qualifying scores in all three events in 2014-15, which was the first time in her four seasons that she recorded a zone score in any event. She won the platform event at the Pittsburgh Invitational, helping the Tigers to the team title at the meet. Doolittle also served as a team co-captain and representative of Clemson’s Student-Athlete Advisory Committee in 2014-15.

Megan Helwagen and Danielle Reitsma were the top point earners in the three-meter and platform, respectively. Helwagen, a junior from Mason, Ohio, scored 52 points in the three-meter, winning the event twice and finishing in the top three in eight out of 10 dual meet competitions. She was Clemson’s top performer in the event at the ACC Championships, placing 22nd and scoring in the conference meet for the first time in her career. Reitsma, a sophomore from Calgary, Alberta, posted 59 points in platform competitions in 2014-15. She scored 11 points in the event at the conference championship meet, and also added one point in the three-meter. Reitsma ranked second on the team in terms of three-meter point total and third in one-meter.

Also at the banquet, the team celebrated the birthday of junior Juliana Melchionda. In addition, the Tigers’ three seniors – Doolittle, Chelsea Uranaka and Emily Yoder – addressed their teammates with words of thanks, encouragement and advice.