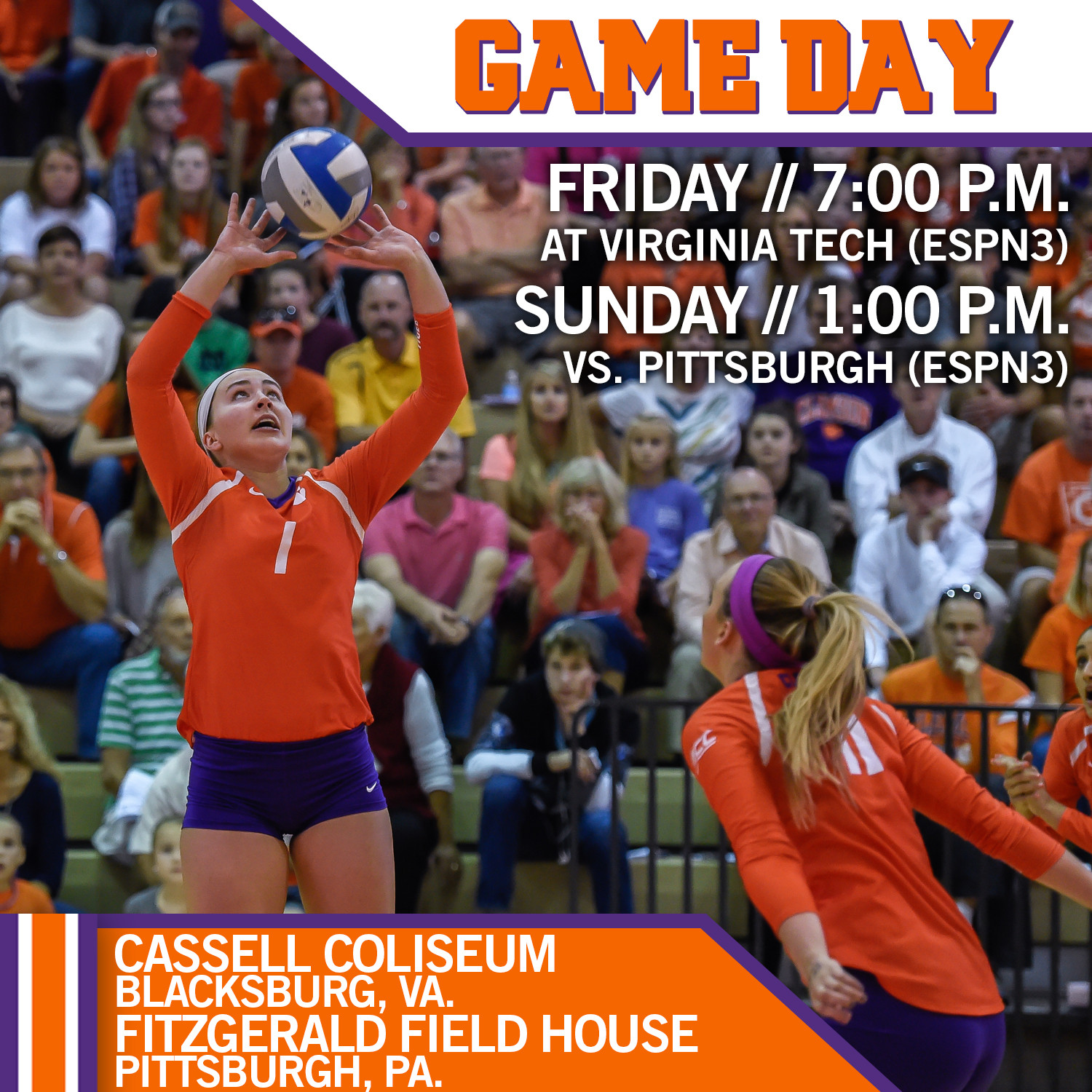 CLEMSON, S.C. – On Thursday, the Tigers leave South Carolina for their second ACC road trip featuring matches against Virginia Tech and Pittsburgh. The Hokies welcome Clemson at 7:00 p.m., on Friday while the Panthers will play host to the Tigers at 1:00 p.m., on Sunday.

Pitt is a program many feel was deserving of an NCAA Tournament bid in 2014. Last season the Panthers fought their way to a 25-6 record with a 13-5 record within the ACC. This year they’re in the midst of another impressive season with a 14-4 record and 4-2 record against the ACC.

“If I’m Pitt and I feel as though I’ve been slighted and I think they, deservedly so, feel as though they were, I’d be playing with a bit of a chip on their shoulder,” said head coach Hugh Hernesman. “They’re looking to make some statements this year so for them, every win matters just to get into the tournament at this point.”

“I think Virginia Tech has the same goals too. They played each other and Virginia Tech won, so this weekend we’re facing two very capable teams and two teams with a lot of experience.”

Megan McGinley impressed last weekend with her 11 blocks in eight sets. The effort included a career-best match against Notre Dame in which she denied hitters six times to go along with eight kills. McGinley’s eight kills complemented the .312 hitting percentage from Sofia Hruby on her eight kills.

“We’ve seen some improvement in being effective out of the middle and I think we’re going to continue to see that happen this weekend. We really isolated and worked on our blocking technique and getting better with our eyes when blocking. We think we can improve there and I’m looking forward to seeing how that carries over into match play.”

Last weekend’s effort makes McGinley Clemson’s leader in blocks with 50. Hruby’s not far behind with 46 on the year.

“The other difference, from my perspective, is they’re getting more experience. For them to come in and play that specific position in our defense in the ACC is not an easy task, even for the best players coming in. So I think we’re seeing their progress as they become more comfortable with the speed of the game, the small little details of the game and the nuances of college game compared to what they’re used to at the club level.“

Notes (in 140 characters or less)• Clemson’s eight freshmen is the highest total in the Atlantic Coast Conference.• Hugh Hernesman is the ninth head coach in Clemson volleyball history.• Clemson is currently sixth in the ACC, averaging 14.69 digs per set.• Keelie Arneson’s 15 digs against #17 Florida State broke her into the NCAA’s list of all-time career dig leaders.• Keelie Arneson is the NCAA’s active career digs leader with 2,450 digs. The total ranks her 18th all-time in NCAA history.• Keelie Arneson is the 36th Clemson student-athlete to be recognized as one of the NCAA’s career leaders in a statistical category.• If Keelie Arneson duplicates her ‘13 performance (712 digs) she will have the second most digs ever recorded in D-I women’s volleyball.• Keelie Arneson ranks 23rd in NCAA history with a career 5.31 digs per set average.• Keelie Arneson currently leads the ACC with 319 digs and a 5.06 digs per set average.• Keelie Arneson’s 5.06 digs per set average ranks her 27th in the nation and is the third best average in a power five conference.• Leah Perri headlines the Clemson attack with 237 kills in 2015 which is the fifth most in the ACC.• Leah Perri ranks sixth in the conference with a 3.67 kills per set average.• Leah Perri is third in the ACC with 270 points and is seventh with 4.15 points per set.• Leah Perri has double-digit kills in 14-of-17 matches this season.• Kate Federico ranks seventh in the conference averaging 8.66 assists per set.• Kate Federico ranks seventhth in the conference with 563 assists.• Kate Federico has eight double-doubles this season and 11 matches with 30 assists or more.• Kate Federico’s 1,171 assists last year are the second most ever recorded by a Clemson freshman.• Kate Federico’s 1,171 assists in 2014 was the second highest total in the ACC and the most recorded by a freshman.• Kailey Harvell has recorded 10 or more kills in 11 of Clemson’s 17 matches this season.• Kailey Harvell is second on the team and not far behind Leah Perri with 196 kills and a 3.02 kills per set average.• Kailey Harvell hit .484 on the outside (16-1-31) two weeks ago against Miami.• Kailey Harvell is credited with a career best 17 kills, and five aces to go along with eight digs against Syracuse.• Kailey Harvell leads Clemson with 14 service aces.• Kennedy Wilson-Talmadge recorded her first career match with 10 digs or more, digging 16 balls against Syracuse.• Kennedy Wilson-Talmadge has 91 digs in 51 sets, which is the most digs of Clemson’s reserves.• Kennedy Wilson-Talmadge is 13 digs away from the fourth highest total on the team with 13 fewer sets.• Megan McGinley’s career-best six blocks against Notre Dame on Friday contributed to her 11 on the weekend in eight sets of work.• Freshman, Taylor Daniel saw her most action of the season against Notre Dame, logging a career-best seven assists in two sets.