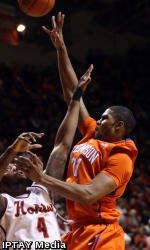 BLACKSBURG, VA – Clemson rallied from a 17-point deficit and had the ball with a chance to tie or win in the final seconds, but Tanner Smith’s baseline shot fell off the rim and Virginia Tech escaped with a 67-65 victory on Saturday at Cassell Coliseum. The Hokies improved to 13-10 overall, 2-6 in the ACC. The Tigers dropped to 11-11 on the season, 3-5 in conference play.

K.J. McDaniels almost single-handedly put the Tigers on his back in the second half, as he scored eight of his team-high 14 points to lead Clemson’s gritty effort after a horrid offensive start to the game. He made 7-of-11 field goals, which included five dunks. He also had five rebounds and five blocked shots in a career-high 28 minutes of action.

Virginia Tech was led by Jarell Eddie, who scored a game-high 15 points. He was supported by 12 points from freshman Dorian Finney-Smith and 10 from Erick Green.

The Hokies jumped out to an 18-5 lead after the Tigers were unable to hang onto the ball in the early going, both on rebound attempts and in half-court sets. Clemson turned the ball over six times by the 12:08 mark of the opening half, and the Hokies scored easily in transition off the miscues. Clemson had only four turnovers the entire 40 minutes against Virginia last Tuesday.

A three-point play underneath on an offensive rebound by the Hokies’ smallest player, Marquis Rankin, made the count 21-7 in favor of Virginia Tech. The lead stretched to as large as 16 on a putback by Green off his own miss. Clemson then got a couple of baskets to fall, first a jumper in the lane by Smith and then a Booker dunk off a Hokie turnover. But, Eddie got a fortunate bounce off the top of the backboard on a three and it fell through to push the lead back to 15 at 28-13.

The lead was extended to a game-high 17 at 34-17 on a four-point play by VT’s Eddie at the 3:23 mark. Catalin Baciu and McDaniels came to life in the final minutes of the opening half. Baciu scored seven points in the final three minutes, while McDaniels tipped home two dunks over the final stages to cut it to 42-28 at intermission.

Clemson came out fighting in the second half, as Young hit a pair of buckets to draw the Tigers closer. But a three by Finney-Smith and a dunk by Victor Davila gave the Hokies a 51-37 lead at the first media timeout. After a McDaniels block inside and a dunk on the other end, the Tigers had it at 53-41. But, Clemson suffered another scoreless drought that lasted about four minutes until Rod Hall made a driving basket with 10:20 remaining in the game.

Following a steal by Smith, roommate Young uncorked his second successful three of the second half from the corner to cut it to 61-50. But, the Hokies once again had an answer as Finney-Smith sank his second three-point goal of the half on the ensuing possession to make the lead 14. The lead finally went under double digits on an offensive board and putback by freshman Bernard Sullivan. He was fouled and made the free throw to cut it to 64-55 with 4:08 to play. Sullivan had a season-best seven points and four rebounds in only nine minutes.

Booker followed with another slam off a transition steal, thundering it home to make it a seven-point deficit at 64-57 at the final media timeout. Sullivan had a chance to pull the Tigers back to within seven after a pair of Dorenzo Hudson free throws, but his follow shot was blocked by Eddie. McDaniels hit a banked shot to make it 66-59. The Tigers got a stop and then found McDaniels for a hit-ahead and easy slam to cut the margin to five.

McDaniels’ fifth slam of the game brought the Tigers within three at 66-63 after a Hokie turnover. But, Clemson fouled Green and the Hokies’ leading scorer only made the first. Smith came down and hit a stepback jumper and made it 67-65 in favor of Tech. Davila was fouled and missed the front end of a one-and-one, giving the Tigers possession in the final seconds.

The Tigers return to action at home on Tuesday, Feb. 7 against the Maryland Terrapins. Tipoff is set for 7:00 PM at Littlejohn Coliseum in a game that will be televised by ESPNU.