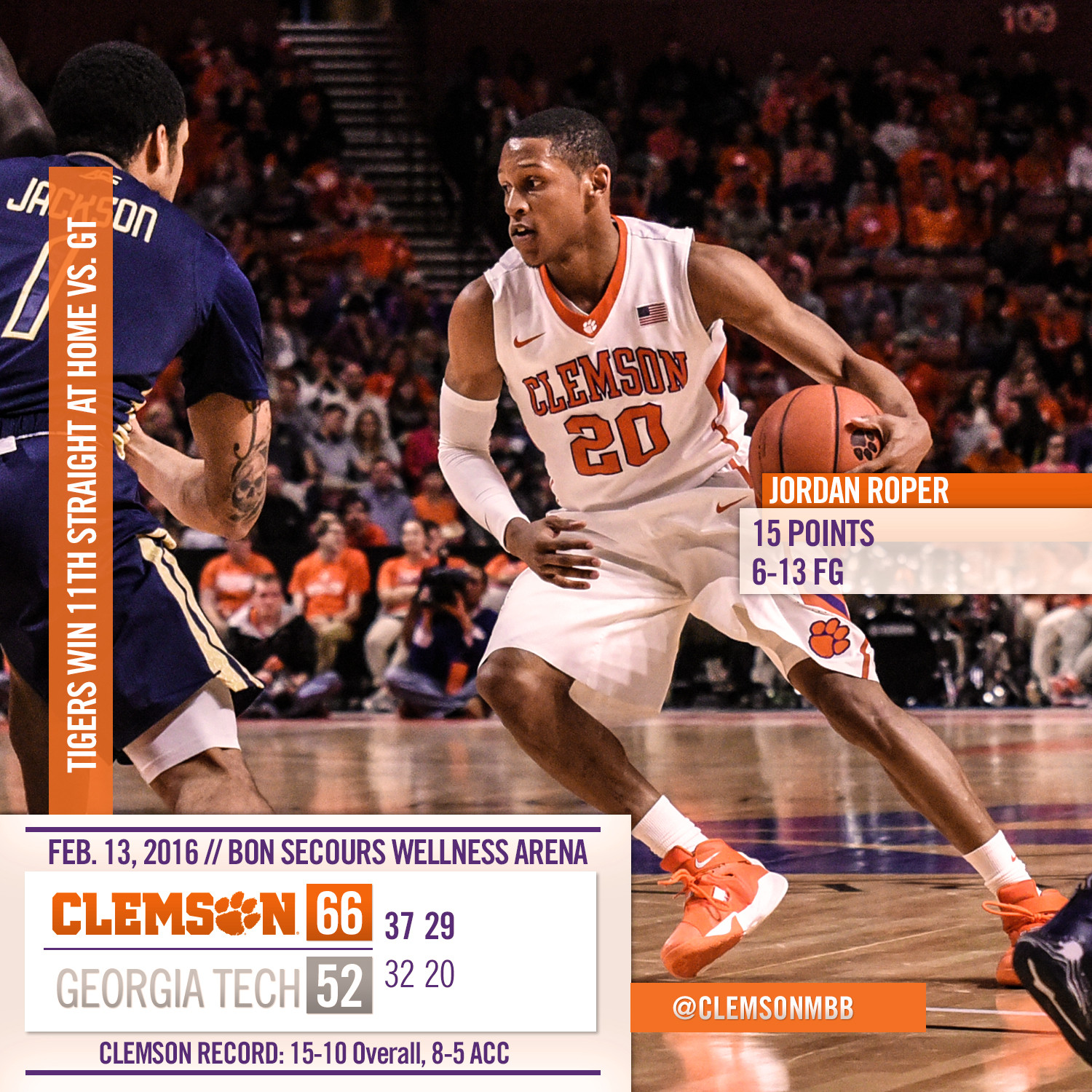 GREENVILLE, S.C. — Clemson delivered another dominant defensive performance on Saturday afternoon at the Bon Secours Wellness Arena, as the Tigers downed Georgia Tech, 66-52. Jaron Blossomgame led the Tigers with 17 points, which put him over 1,000 for his career, while Jordan Roper finished closely behind with 15 points. The two leaders helped the Tigers earn win No. 15 on the season, pushing Clemson to 8-5 in the ACC. Tech fell to 13-12 overall, 3-9 in league play.

Avry Holmes put together a strong defensive performance, as the junior forced six of the Tigers’ 10 steals on the day. Clemson also managed to hold Georgia Tech to 1-11 shooting from three-point range, and held the Yellow Jackets to just 25 percent overall after halftime.

Despite quick baskets by Landry Nnoko and Blossomgame at the outset, the Tigers struggled to find consistency on offense early in the wake of Georgia Tech’s hot start from the field. The Yellow Jackets quickly pulled out to a 14-8 lead. Clemson continued to gradually dig into Tech’s lead while playing stout defensively. As the Yellow Jackets struggled to make shots from beyond the arc, the tide began to turn in the Tigers’ favor following a successful three-point play from Blossomgame to bring the Tigers within four at 20-16 with 11:12 to go in the first half.

From there, Clemson got quality physical play from Nnoko in the paint, who, despite an early foul, provided the Tigers with a spark as he went 3-3 from the field in the first half. Following a Nnoko basket to bring the Tigers within two at 24-22, Roper snagged a rebound off of a Georgia Tech shot attempt and turned it into a quick score to tie the game with 7:44 to go in the half. With 4.4 seconds left in the half, Roper came up one of the biggest plays of the game, stealing a Georgia Tech inbounds pass and draining a long jumper as time expired to give Clemson momentum and a 37-32 leading at halftime.

The Tigers continued to stay aggressive defensively despite a second-half surge from the Yellow Jackets. With the Yellow Jackets pulling within a point at 43-42, Clemson got a big three from Roper to keep the Tigers ahead 46-42. However, the Yellow Jackets refused to yield, keeping Clemson on its toes the entire half. Trimming the Tigers’ lead down yet again, it was Holmes that came up with the big defensive play, with a steal and score to push the Tigers’ lead back to four at 50-46 with 7:53 left. The ensuing Georgia Tech possession, Sidy Djitte came up with the steal that resulted in an offensive rebound and layup from Grantham to push the Tigers ahead 52-46. Despite continued resilience from Georgia Tech, Clemson never relinquished its lead in the midst of its stout defensive performance.

The Tigers finish out a three-game home stand on Wednesday, February 17 when Boston College visits Greenville. The two teams square off at 7 p.m. from Bon Secours Wellness Arena. Tickets are available by visiting ClemsonTigers.com or by calling 1-800-CLEMSON.